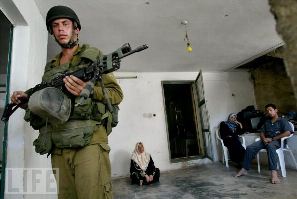 On Thursday morning, Israeli troops invaded an area near the northern West Bank city of Jenin, and kidnapped three Palestinians, the Palestine News Network reported. Local sources stated that “special units” invaded the village of Kafr Ra’I and detained Mu’tasim Wa’il Malham along with his brothers Muhammad and Muntasir, after searching their home.

In a related report, seven army vehicles invaded the nearby village of Qabatya, and conducted a thorough search operation targeting several houses. No arrests were made.

Furthermore, the army closed off the main road between Jenin and Tulkarm, near an Israeli settlement, while soldiers were deployed along the road. No reason was given for the closure of the road at the time of this report. It was closed last year for more than nine months.

More than 30% of land in the Jenin area is located behind the Annexation Wall, and an extra 25% is being used as settler-only roads.