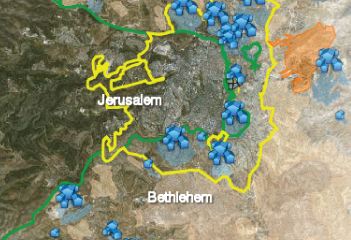 The constructions are being conducted in major settlements along with small and isolated outposts.

Bulldozers and construction equipment are also conducting massive infra-structure work and preparations for the construction of 24 units in Fiduel, Rhan (18 units), Ateret (18 units), Susia (15 units), Maaleh Mikhmash (11 units), and other constructions in several other settlements.

All of the constructions started after September 26, the date that marked the end of Israel’s so-called settlement freeze, an issue that means that thousands of settlers will moving into settlements in the occupied West Bank and occupied East Jerusalem.

During the freeze, Israel continued the construction in several settlements under the claim that the constructions were approved before the nine-month freeze started.
Meanwhile, Mark Regev, spokesperson of Israeli Prime Minister, Benjamin Netanyahu, claimed in an interview with the New York Times that “the current constructions do not affect the peace process”.

Hagit Ofran of Peace Now, stated that the Israeli government has approved the construction of 13.000 settlement units in the occupied territories, and that Israel built 9000 units in the last three years.

The report was even confirmed by a David Ha’afry, member of the ‘Shomron’ Regional Settlement Council, who said that Peace Now numbers are correct adding that “settlement freeze is over, and we need to make up for the lost time”.

Furthermore, Israeli paper Yedioth Aharonoth, stated that most constructions in recent years were conducted in large settlement blocks and settlements close to the Green Line, and that those settlements will always be under Israeli control should Israel and the Palestinians “agree on a land swap”.

But the recent constructions are also being carried out in settlements far away from the Green Line such as Tepoah, Talmon and Ofra.

Direct peace talks with Israel were halted after the Israeli government refused to stop its settlement activities in the occupied territories and declared further construction plans.

Israel’s ongoing invasions and violations in the West Bank, and the ongoing demolition of Arab homes in East Jerusalem were also among the reasons that pushed the Palestinians to stop the talks with Israel.