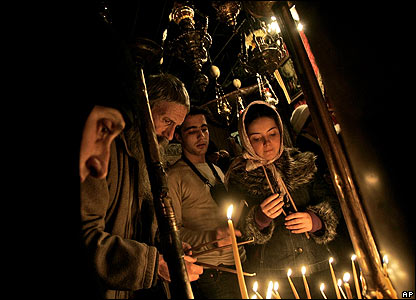 On Friday, Jerusalem’s Latin Patriarch Fuad Tawwal and the senior officials of the Catholic Church arrived in Bethlehem through the gate of the Israeli Wall to attend the midnight mass at the Nativity Church.The delegation was received at the northern entrance of the city by the mayors of Bethlehem, Beit Sahour and Beit Jala. Palestinian Authority officials, including the President Mahmoud Abbas and foreign dignitaries will also arrive in the late afternoon to attend the mass at the Nativity Church, where the tradition marks as the birthplace of Jesus of Nazareth.

In an address issued on Tuesday, Tawwal stressed the commitment of Christians with peace and lamented the failure of renewed direct peace talks between Israel and Palestinians. ‘We are running after peace, but it keeps evading us,’ he said.

‘The world does not want to give us peace, but do not lose hope; we are working and praying for it to come, so we can all come out of this difficult situation,’ Tawwal stated and added that “on both sides, and in the international community, there are men of goodwill who will work and put their energies together in their commitment for peace,’ he said in his address Tuesday.

Today’s midnight mass, which will be followed by millions of people from several parts of the world, is expected to include a message for peace, especially with regard to the Israeli-Palestinian conflict.

Mahmoud Abbas referred to the importance of this day for Bethlehem and Palestine and congratulated Palestinian Christians and Christians worldwide.

However, he stressed that, for another year, the “City of Jesus” is still under Israeli occupation and hoped that ‘peace will prevail in the Holy Land for years to come.’

Bethlehem’s tourist sector, which is affected by the occupation, is expected to come alive, due to about 90,000 tourists will visit the eternal capital of Christmas these days. Meanwhile, about 23% of the residents remain unemployed because of closures and lack of opportunities.