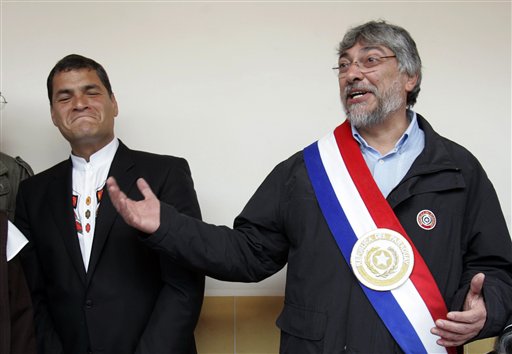 After the President of Ecuador, Rafael Correa, officially recognized an independent Palestinian State on Friday, Paraguay announced that is planning to make the same decision next year. Palestinian President Mahmoud Abbas welcomed the Ecuadorian Government’s decision to recognize the Palestinian State along the 1967 borders with Israel, stressing that Ecuador’s recognition is an example of the South American country’s commitment to Palestine.

In addition, the Spanish Foreign Minister, Trinidad Jimenez, said on Sunday to Spanish media that the E.U. could also recognize a Palestinian state in 2011. She said, ‘That is our objective. If we do not get the whole of the E.U. membership to recognize Palestine, I hope that at least a good number of countries will recognize it; and Spain will be one of them’.

Earlier this month, Brazil, Argentina and Bolivia recognized a Palestinian state, joining previous initiatives submitted by all Arab countries, most African nations and several of the Asian economic powers, including China and India.