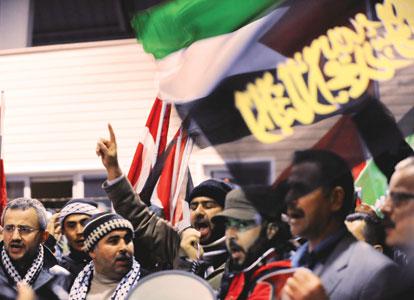 Dozens of thousands of Turkish and international activists welcomed on Sunday the Mavi Marmara ship at the Istanbul Port seven months after the deadly Israeli attack in international waters that left nine Turkish activists dead.The ship, part of the Freedom Flotilla that was heading to Gaza filled with medical and humanitarian supplies, was violently boarded and attacked on the dawn of May 31 by the Israeli Navy and Israeli commandos.

On Sunday afternoon, around 1 P.M., the ship made it into Istanbul carrying the families of the victims and 50 activists who were wounded during the Israeli attack on the solidarity ship.

Ümit Sönmez, coordinator of the production branch of the Humanitarian Relief Foundation, IHH, which organized the flotilla, told the Hürriyet Daily News & Economic Review, that another solidarity flotilla will be sent to Gaza on May 31, 2010.

On Friday, December 24, several Turkish civil society institutions held a meeting at the IHH with the participation of British, Lebanese, Spanish and Canadian activists, and activists from different parts of the world.

The Hurriyet Daily News in Turkey reported that the İHH has initiated a project called “Nine Martyrs, Nine Monuments,” under which it will construct schools, cultural centers or sport complexes in the hometowns of those who died to remind people of the risks they took, Chairman Bülent Yıldırım said.

The ship, Marmara, will anchor in Istanbul for one week; it will be open to tours led by guides who experienced that Israeli attack on May 31.

Later on, the ship will be taken to a shipyard for maintenance before it sails again to Gaza next year.