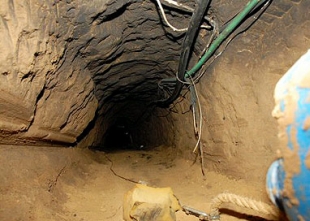 Egypt announced that its security forces located a large weapons storage facility in the Sinai Desert, and stated that the weapons were meant to be smuggled into the Gaza Strip.Weapons and explosives, including anti-aircraft missiles and bullets, were located in the storage facility, Egyptian security sources said.

The security forces loaded the weapons and explosives onto trucks and took them to a security base.

Egypt uncovered dozens of tunnels and weapon storage facilities this year in the Sinai Desert and on the border with the Gaza Strip.

During his weekly cabinet meeting on Sunday, Israeli Prime Minister, Benjamin Netanyahu, stated that should weapons continue to be smuggled into Gaza, “Israeli will have no choice but to strike Hamas and other armed resistance groups”.

Meanwhile, a number of resistance groups in Gaza said that they are readying for a potential new Israeli aggression on the coastal region.

Furthermore, Prime Minister of the dissolved Hamas government in Gaza, Ismail Haniyya, accused Israel of over-exaggerating the power of resistance groups in Gaza “in order to justify another brutal offensive”.

Haniyya stated that he does not believe Israel will launch a new offensive on Gaza soon, but added that “this does not mean that the enemy has dropped its hostile intentions against the Palestinian people”.