Israeli Activist in Jail for Protest Against Gaza Siege 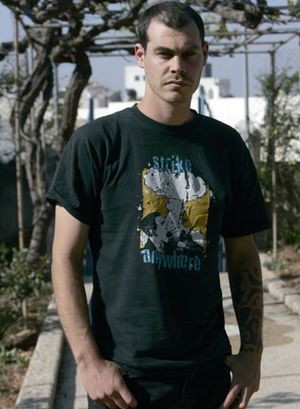 Jonathan Pollak was handed a three-month prison term, on Monday, for taking part in a bicycle demonstration against the blockade on Gaza almost three years ago.
Israeli activist Jonathan Pollak was sentenced to three months in jail and ordered to pay NIS 1,500 for participating in a mass protest cycle ride against the blockade of the Gaza Strip in Tel Aviv, in January 2008.

Pollak, aged 28, rejected the offer of Tel Aviv Magistrate to alternatively do community service, claiming that he did not do anything wrong. He argued saying in a telephone interview quoted in the Guardian: ‘I have no doubt that what we did was right and, if anything, not sufficient considering what is being done in our name…If I have to go to prison to resist the occupation, I will do it gladly.’

Pollak commented that his sentence comes amidst a general deterioration in the right to dissent from Israeli occupation policies. His lawyer, Gaby Lasky, stated that it is uncommon for someone to be imprisoned in an illegal assembly case. An official at the court in Tel Aviv specified, however, that the Israeli activist had three prior convictions, including one with the charges of ‘distraction of order and vandalism’, and a three-month suspended sentence for protesting against the West Bank separation barrier.

Defense attorney Lasky also asserted that in a country where rabbis are not questioned when they are suspected of incitement against Arabs, on the basis of freedom of expression, it is inappropriate for the Israeli state to sentence Pollak to jail for participating in a demonstration.

Lasky has been arguing throughout the case that Pollak’s indictment was discriminatory. He said to The Independent he planned to tell the court: ‘It will be the justice system itself… that will need to lower its eyes in the face of the suffering inflicted on Gaza’s inhabitants, just as it … averts its vision every day when faced with the realities of the occupation.’

The Israeli police and the ministry of justice refused to comment on the sentence.

Dan Yakir, chief legal adviser of the Association for Civil Rights in Israel, condemned the imprisonment and reportedly pointed out: ‘The entire affair raises suspicion that Pollak was personally targeted because of his views in an attempt to silence him and prevent him from partaking in various acts of protest.’

Pollak said he regretted not having played a bigger role in the protest against the Gaza blockade. He was quoted by Haaretz stating: ‘Your honor said during the trial that a trial is not a political affair but matter of the law…I have to say that in this trial there is nothing but politics.’

The sentence was put on a 15-day hold after the defense attorney’s request, to enable Pollak to consider appealing to the district court.

Mr Pollak is one of the founders of the Israeli activist group Anarchists against the Wall, known to demonstrate weekly alongside Palestinians against the Wall and settlements in the Occupied Territories.

He attended the first of many other demonstrations as a months-old babe-in-arms at the mass rally in Tel Aviv calling for an end to the first Lebanon war in 1982. He found himself drawn into the second Intifada as well as the very first anti-Wall protests in the West Bank village of Jayyous.