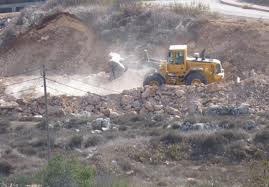 Settlers from the Kida settlement, located southeast of Nablus, seized 60 dunums of land in the Jaloud district, the PNN claimed on Tuesday. Ghassan Douglas, the PA official in charge of filing settler attacks, denounced: “A number of settlers came last night and seized 60 more dunums…meaning they now control the rest of the Central Khala Abu Shabraqeh plain. It is surrounded by the Ahya settlement in the west and the Kida settlement in the east.”

The latest episode of land confiscation has brought the total of seized land in the area to 100 dunums over the past week.

Three days ago, local settlers had confiscated 20 dunums of land adding up to another 20 dunums taken last week.

Eyewitnesses reported that settlers from Shafout Raheel had continued their settlement expansion by clearing the surrounding land, and building several houses and mobile dwellings.

Jaloud is currently surrounded by settlements on four sides: Shafout Raheel, Ahya, Kida, and Adi Ad. The main road connecting Jaloud and agricultural lands with the eastern area had been closed.