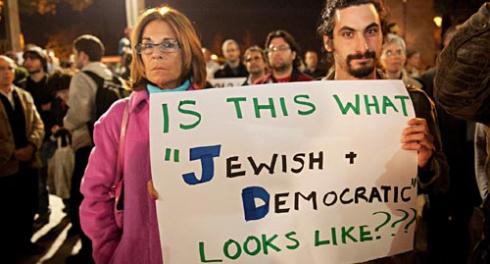 In a letter published Tuesday in the Israeli press, around two dozen wives of prominent Israeli rabbis followed a recent edict by their husbands for Jews to refuse to rent or sell property to Arabs with an edict of their own: that Jewish women refuse to date or associate with Arab men.The letter includes gross generalizations about Arabs, specifically referencing Palestinians with Israeli citizenship: “There are quite a few Arab workers who use Hebrew names. Yusuf becomes Yossi, Samir becomes Sami and Abed becomes Ami. They seek your proximity, try to appeal to you and give you all the attention you could ask for, they actually know how to act polite, making you believe they really care – but that behavior is only temporary.”

It continues, ‘As soon as they have in you in their grasp, in their village, under their complete control – everything becomes different. Your life will never be the same, and the attention you sought will be replaced with curses, physical abuse and humiliation.’

The women give no evidence whatsoever for their claims, and Palestinians immediately condemned the letter for its use of “scare tactics, generalizations and outright racist statements”.

The letter also states, “Your grandmothers never dreamed that one of their descendents would, by one act, remove future generations from the Jewish people. For you, for future generations, and so that you will never have to endure the terrible suffering, we appeal to you, begging, pleading, praying: Don’t date them, don’t work where they work and don’t perform National Service with them.’

This follows on the heels of a religious edict issued by the womens’ husbands, who are all prominent rabbis in Israel, in which they claim that the Jewish holy book, the Torah, forbids the sale or rental of property to non-Jews (specifically referencing Palestinians).

The rabbis and their wives are mainly part of a group called ‘Lehava’, which encourages segregation and discrimination against non-Jews in Israel. The group can be traced back to the late Rabbi Meir Kahane, who headed an organization called ‘Kach’, which was classified by Israel as ‘terrorist’ for its attacks against civilians. One if the members of that group was Baruch Goldstein, a doctor from Brooklyn, New York, who came to Israel in 1994 to gun down 29 Palestinians praying in a mosque in Hebron.