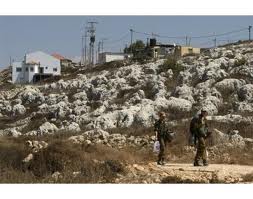 Settler attacks erupted on Wednesday in two locations in the northern West Bank, destroying several vehicles and causing fire damage to agricultural fields, local sources said.
Officials reported farmers were attacked in the village of Asira Al-Qibliya, south west of Nablus, by settlers from the Yitzhar settlement for the second consecutive day.

PA official Ghassan Doughlas said half a dozen settlers had come down and set fire to farmlands. Later, settlers reportedly withdrew from the area resulting into minimal damage.

In the southern area, near Sinjil, just off the Ramallah-Nablus road, Israeli forces closed the main thoroughfare as dozens of settlers threw stones at several Palestinian cars. At the scene, according to an official eyewitness, settlers were said to be positioned near the Shilo settlement.

In related news, a group of settlers from the Yitzhar settlement also uprooted 30 olive trees, on Wednesday afternoon. The trees belonged to Palestinian farmers from Madaba village.