Two years after Gaza massacre, a demand for justice 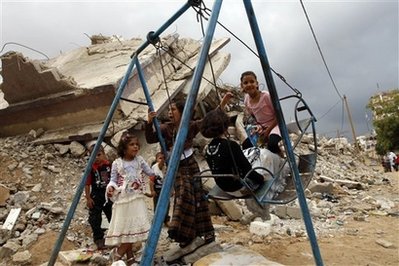 Open letter, various undersigned, 27 December 2010
We the Palestinians of the besieged Gaza Strip, on this day, two years on from Israel’s genocidal attack on our families, our houses, our roads, our factories and our schools, are saying enough inaction, enough discussion, enough waiting — the time is now to hold Israel to account for its ongoing crimes against us.

On 27 December 2008, Israel began an indiscriminate bombardment of the Gaza Strip. The assault lasted 22 days killing 1,417 Palestinians, 352 of them children, according to mainstream human rights organizations. For a staggering 528 hours, Israeli occupation forces let loose their US-supplied F-15s, F-16s, Merkava tanks, internationally-prohibited white phosphorous, and bombed and invaded the small Palestinian coastal enclave that is home to 1.5 million, of whom 800,000 are children and over 80 percent UN-registered refugees. Around 5,300 remain permanently wounded.

This devastation exceeded in savagery all previous massacres suffered in Gaza, such as the 21 children killed in Jabaliya in March 2008 or the 19 civilians killed sheltering in their house in the Beit Hanoun massacre of 2006. The carnage even exceeded the attacks in November 1956 in which Israeli troops indiscriminately rounded up and killed 275 Palestinians in the southern town of Khan Younis and 111 more in Rafah.

Since the Gaza massacre of 2009, world citizens have undertaken the responsibility to pressure Israel to comply with international law, through a proven strategy of boycott, divestment and sanctions (BDS). As in the global BDS movement that was so effective in ending the apartheid South African regime, we urge people of conscience to join the BDS call made by over 170 Palestinian organizations in 2005.

As in South Africa the imbalance of power and representation in this struggle can be counterbalanced by a powerful international solidarity movement with BDS at the forefront, holding Israeli policy makers to account, something the international governing community has repeatedly failed to do.

Similarly, creative civilian efforts such as the Free Gaza boats that broke the siege five times, the Gaza Freedom March, the Gaza Freedom Flotilla, and the many land convoys must never stop their siege-breaking, highlighting the inhumanity of keeping 1.5 million Gazans in an open-air prison.

Two years have now passed since Israel’s gravest of genocidal acts that should have left people in no doubt of the brutal extent of Israel’s plans for the Palestinians. The murderous navy assault on international activists aboard the Gaza Freedom Flotilla in the Mediterranean Sea magnified to the world the cheapness Israel has assigned to Palestinian life for so long. The world knows now, yet two years on, nothing has changed for Palestinians.

The Goldstone Report came and went: despite its listing count after count of international law contraventions, Israeli ‘war crimes’ and ‘possible crimes against humanity,’ the European Union, the United Nations, the Red Cross, and all major human rights organizations have called for an end to the illegal, medieval siege, it carries on unabated.

On 11 November 2010, UNRWA (the UN agency for Palestine refugees) head John Ging said, ‘There’s been no material change for the people on the ground here in terms of their status, the aid dependency, the absence of any recovery or reconstruction, no economy … The easing, as it was described, has been nothing more than a political easing of the pressure on Israel and Egypt.’

On 2 December, 22 international organizations including Amnesty, Oxfam, Save the Children, Christian Aid, and Medical Aid for Palestinians produced the report Dashed Hopes, Continuation of the Gaza Blockade calling for international action to force Israel to unconditionally lift the blockade, saying the Palestinians of Gaza under Israeli siege continue to live in the same devastating conditions.

Only a week ago Human Rights Watch published a comprehensive report Separate and Unequal (http://www.hrw.org/en/node/95059/section/1) that denounced Israeli policies as ‘apartheid,’ echoing similar sentiments by South African anti-apartheid activists. We Palestinians of Gaza want to live at liberty to meet Palestinian friends or family from Tulkarem, Jerusalem or Nazareth; we want to have the right to travel and move freely. We want to live without fear of another bombing campaign that leaves hundreds of our children dead and many more injured or with cancers from the contamination of Israel’s white phosphorous and chemical warfare. We want to live without the humiliations at Israeli checkpoints or the indignity of not providing for our families because of the unemployment brought about by the economic control and the illegal siege. We are calling for an end to the racism that underpins all this oppression.

We ask: when will the world’s countries act according to the basic premise that people should be treated equally, regardless of their origin, ethnicity or color — is it so far-fetched that a Palestinian child deserves the same human rights as any other human being? Will you be able to look back and say you stood on the right side of history or will you have sided with the oppressor?

We, therefore, call on the international community to take up its responsibility to protect the Palestinian people from Israel’s heinous aggression, immediately ending the siege with full compensation for the destruction of life and infrastructure visited upon us by this explicit policy of collective punishment. Nothing whatsoever justifies the intentional policies of savagery, including the severing of access to the water and electricity supply to 1.5 million people. The international conspiracy of silence towards the genocidal war taking place against the more than 1.5 million civilians in Gaza indicates complicity in these war crimes.

We also call upon all Palestine solidarity groups and all international civil society organizations to demand:

* An end to the siege that has been imposed on the Palestinian people in the West Bank and Gaza Strip as a result of their exercise of democratic choice;

* The immediate release of all political prisoners;

* That Palestinian refugees in the Gaza Strip be immediately provided with financial and material support to cope with the immense hardship that they are experiencing;

* An end to occupation, apartheid and other war crimes;

* Immediate reparations and compensation for all destruction carried out by the Israeli occupation forces in the Gaza Strip;

* Boycott, divest and sanction, join the many International trade unions, universities, supermarkets, and artists and writers who refuse to entertain apartheid Israel;

* Speak out for Palestine, for Gaza, and crucially act. The time is now.

* The One Democratic State Group

* Association of Al-Quds Bank for Culture and Info

* Palestinian Association for Fishing and Maritime

* The General Society for Rehabilitation

* Al-Sahel Centre for Women and Youth