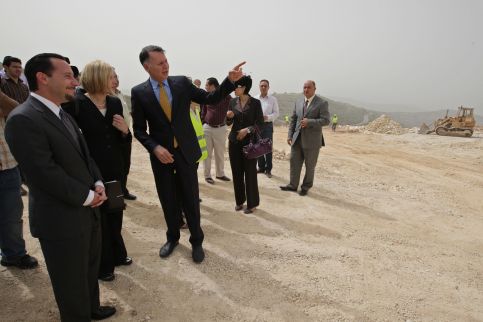 (Image below) Bashar Masri shows US Consul General in Jerusalem Daniel Rubinstein (left) and USTDA Director Leocadia Zak (second from left) around the site of the planned Rawabi real estate development near Ramallah, March 2010. (Haytham Othman/MaanImages)The Boycott, Divestment and Sanctions National Committee (BNC) in Palestine, has expressed its concern following reports that Israeli companies have been contracted to take part in the construction of Rawabi, an already controversial Qatari-financed Palestinian real estate development in the occupied West Bank.

Rawabi (www.rawabi.ps) is touted by developers as the ‘first planned Palestinian city.’ It has the political backing of the Western-supported Ramallah-based Palestinian Authority (PA), and international sponsors of the ‘peace process’ including the United States government and former UK prime minister and current envoy of the ‘Quartet,’ Tony Blair. The Quartet is comprised of the US, the European Union, Russia, and the UN Secretary General.

The BNC, the coordinating body for the Palestinian boycott, divestment and sanctions (BDS) campaign said in a statement sent to The Electronic Intifada that, ‘Given that the Rawabi project has taken several deeply problematic decisions that undermine the boycott campaign and principles of national consensus among Palestinians, as well as promotes a ‘business-as-usual’ approach to Israel, this latest report requires close scrutiny by Palestinian political parties, unions, NGOs [nongovernmental organizations], and civil society at large.’

The BNC conceded that the use of Israeli firms by Palestinians can be permitted, when there is no other option, but boycott compliance would have to be assessed on a case-by-case basis.

However, the BNC added that the ‘involvement of a Qatari business in a Palestinian project where Israeli companies are also involved is certainly a form of normalization’ which ‘uses the Palestinian side as a bridge to normalize, or a fig leaf to cover up, collusion with Israeli companies almost all of which are complicit in Israel’s occupation, apartheid and denial of fundamental Palestinian rights.’ Qatari Diar (www.qataridiar.com), a major real estate development company in the Middle East and Europe, is the only international investor in Rawabi. The BNC strictly opposes normalization between Israel and Arab countries.

Bashar Masri, CEO of the Ramallah-based Bayti Real Estate Investment company, the developer of Rawabi and its other major investor, confirmed to The Electronic Intifada that so far a dozen Israeli companies are suppliers to the project.

Masri wrote that the reliance on Israeli firms was necessitated by crippling restrictions the occupation has imposed on Palestinian economic activity in the West Bank. The Palestinian construction industry, he said, relies on Israel for vital supplies including cement, sand, water supply and electricity. ‘It is true that we are already buying products from about 12 Israeli suppliers in addition to the more than 60 Palestinian suppliers,’ Masri stated, ‘As for the actual construction it is all done exclusively by Palestinian contractors and Palestinian human resources.’

Masri also confirmed that he had discussed the use of Israeli firms with Qatari Diar and ‘they understand that there are no [other] options whatsoever.’

Usama Kahil, the deputy head of the Palestinian Contractors Federation, speaking to Ma’an news agency, contested the claim that Palestinian contractors could not meet the needs of large projects like Rawabi and insisted that all Palestinian and Arab options be exhausted before Israeli firms were invited to become suppliers.

A contract condition that Masri’s company imposes on all suppliers, including the Israeli ones, is that they refrain from sourcing any goods or services from Israeli settlements in territories occupied by Israel during the June 1967 war, including the occupied West Bank and East Jerusalem, and the Golan Heights. This stipulation has prompted uproar from Israeli settler groups.

For its part, the BNC said it could only assess whether particular contracts violated the boycott by examining details of each Israeli firm, whose names Masri’s company has not released. ‘Dealing with some indispensable Israeli companies is something Palestinian businesses are compelled to do given the conditions of siege and the fact that the captive Palestinian economy has been so thoroughly made reliant on Israel through decades of occupation,’ the BNC stated.

But, it added, ‘There is a twisted logic in some Palestinian business quarters that rationalizes working with Israeli companies, even when there are Palestinian or international alternatives, as a means to assure easier issuance of Israeli military permits, necessary for conducting any form of business.’ While such quid pro quos could help remove obstacles in the short run, the BNC warned, ‘the ultimate result is perpetuating Israel’s occupation and economic subjugation of the Palestinian people and the Palestinian economy.’

A year ago many Palestinians were stunned to learn that Rawabi had accepted a donation of thousands of tree saplings from Israel’s quasi-official Jewish National Fund (JNF), the body charged with managing lands throughout historic Palestine seized from Palestinians, and which under decades-long JNF practice are reserved exclusively for the use of Jews. The JNF has long used ‘green’ tree-planting initiatives as a strategy to cover up traces of Palestinian villages ethnically cleansed by Israel or as an active means to dispossess Palestinians, as it is doing today to Bedouins in the Negev.

Masri is passionate about Rawabi and presents it as a necessary project in the development of Palestine, especially to address urgent housing needs. Nor does he see it as contradicting efforts to end the ‘miserable occupation.’ But in addition to being a private, for-profit venture, there is an unmistakable political dimension, which the latest revelations of Israeli involvement only underscore.

Lunat described how, ‘A consensus has developed among the political elite, and even among Arab states, that improving Palestinians’ quality of life, even if under military occupation, is the long sought solution for Palestinian misfortunes’ (‘The Netanyahu-Fayyad ‘economic peace’ one year on,’ 10 February 2010).

With a lot of fanfare and foreign support, Salam Fayyad launched a much-publicized ‘institution-building’ initiative to lay the ground for a Palestinian state. With little tangible to show for it, Fayyad and his backers have enthusiastically adopted Rawabi as the symbol of the business-friendly state they want to create. The developers embrace that vision as well, as the Rawabi newsletter put it: ‘The city will also promote and support the transformation of Palestine into a more investor-friendly region by building on the assets of the first Palestinian planned city’ (Rawabi Newsletter, winter 2010 [PDF]).

The international support for Rawabi is also part of the Quartet’s ‘West Bank First’ policy. While Gaza is subjected to a punishing Israeli siege with international complicity, aid and attention have been lavished on the West Bank in an attempt to shore up support for the Palestinian Authority (Masri says his company also had plans for a housing project in Gaza, but it has been impossible to implement them).

Asked whether he saw Rawabi as part of Fayyad’s effort, Masri pointed out that planning for Rawabi began in 2007, while Fayyad announced his ‘state-building’ initiative much later. ‘Rawabi seems to fit well, but that is a coincidence,’ Masri observed.

Rawabi’s promotional materials make much of endorsements by Fayyad and the Ramallah Palestinian Authority of Mahmoud Abbas. The United States Trade and Development Agency (USDTA) has carried out several feasibility studies in support of Rawabi, through US contractors. In addition, Tony Blair has lobbied the Israelis (so far unsuccessfully) for the developers to be allowed to build an access road across occupied West Bank land in ‘Area C’ (the 60 percent of the West Bank that remains under full Israeli occupation with no role for the PA) and has promoted the project in public comments.

Rawabi will provide 5,000 ‘affordable’ housing units for an initial 25,000 people, expanding in later phases to house 40,000, according to the company newsletter:

‘Unlike any other in Palestine, Rawabi will be characterized as a modern, high-tech city with gleaming high-rise buildings, green parks and shopping areas.’ Located 6 kms from Ramallah, ‘Rawabi is sure to become a future social hub for young professionals and families, offering a higher quality shopping experience, entertainment facilities and serving as an overall social and business networking destination in the West Bank.’

This vision differs little from that offered by new developments sponsored by Qatari Diar and other developers that are sprouting up all over the Arab world. Rawabi’s website and promotional materials are full of endorsements from international officials, but say little about whether the vision is one that any Palestinian communities have been invited to help shape.

Masri insists that Rawabi meets an urgent need: ‘The housing shortage is so bad for middle income and of course for low income’ and he says that thousands of people have expressed an interest, through the company’s website, in buying units. While final prices have not been set, Masri estimates based on current projections that units would sell for $60,000 to $100,000 dollars which would translate into a mortgage payment of $450 to $750 per month.

Such costs would currently only be within reach of a small elite in the economically-depressed occupied West Bank where, according to a World Bank report in September, annual per capita gross domestic product hovers below $2,000, and virtually all recorded economic growth is a result of direct foreign subsidies to the bloated PA bureaucracy, or to the income of Palestinians working in illegal Israeli settlements.

Masri adds that his company will announce ‘plans in the future for limited income housing but this is for a later stage.’

If projects like Rawabi are to yield profits any time soon without relying solely on marketing to the well-to-do elite, they will depend on convincing Palestinians to go into massive amounts of mortgage debt, as happened before the real-estate bubble burst in 2008 in the United States and other hard-hit countries including Ireland.

As Lunat observed, Rawabi ‘is Fayyad’s flagship project. The Washington Post reported that Rawabi ‘is specifically designed for upwardly mobile families of a sort that in the United States might gravitate to places such as Reston, VA. The developments are also relying on another American import, the home mortgage, including creation of a Fannie Mae-style institution for the West Bank.’ USAID, a branch of the American government, is funneling funds through non-governmental organizations (NGOs) for the promotion of a mortgage culture in Palestine to support these initiatives from bottom-up.’

Masri conceded that the ‘more expensive’ apartments in Rawabi would be attractive to Palestinians from the diaspora who (presuming they have foreign passports on which Israel might allow them to enter the occupied territories) they could use when visiting.

In addition to concerns about possible boycott violations and normalization with Israel, the Rawabi model raises deeper questions for all Palestinians. Even if Masri has the best of intentions, Rawabi represents an entirely top-down, profit-driven approach to the development of Palestine where the ‘vision’ created by financiers, marketers, international investors and ‘peace process’ officials is substituted for the aspirations of the broader community.

Palestinian nationalism is transformed into a zeal for real-estate deals and the establishment of gated communities rather than a focus on liberating human beings and giving them the chance to decide for themselves how they want to live and what they want their communities to look like.

It is a model of development that can be seen spreading across the region from Morocco to Beirut to Amman’s Abdali quarter where first-class housing and private facilities are created for those who can afford them. Meanwhile public infrastructure and the needs of the vast majority of disenfranchised people are an afterthought at best.

Ali Abunimah is co-founder of The Electronic Intifada, author of One Country: A Bold Proposal to End the Israeli-Palestinian Impasse and is a contributor to The Goldstone Report: The Legacy of the Landmark Investigation of the Gaza Conflict (Nation Books).