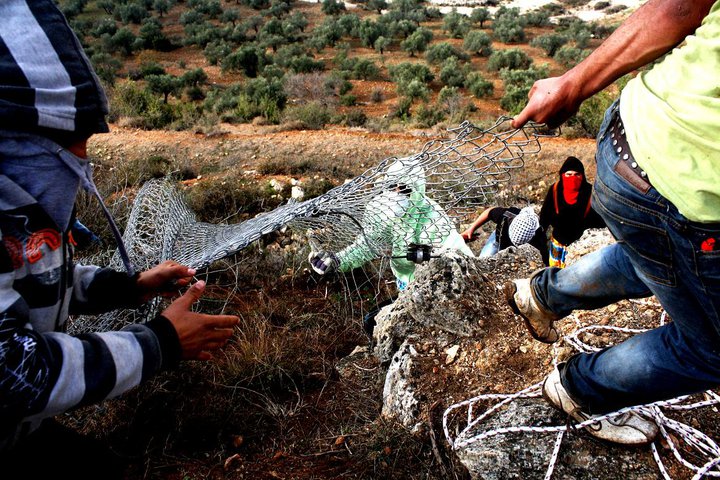 On Friday, a civilian was hit by a tear gas canister during the weekly nonviolent protest against the Annexation Wall in the village of Bil’in. Also, dozens of people were treated from the ill effects of tear gas inhalation during the demonstrations in an-Nabi Saleh and al-Ma’sara.In Bil’in, the latest nonviolent march of 2010 was held, as has been the case for every week since 2005, despite the Israeli army blockading the village in the early morning. Israeli and international supporters managed to join the protest, after midday prayers were held.

In addition, Palestinian Prime Minister Salaam Fayyad took part in the demonstration as an action to mark the creation of Fatah political party, which was founded in 1965.

As soon as the crowd reached the wall, local youth managed to dismantle parts of it, but Israeli soldiers stationed at the nearby gate, which separates local farmers from their lands, fired tear gas in all directions.

As a result, one person was hit in the face with a tear gas canister and rushed to Ramallah for medical treatment. Many others were treated for the effects of tear gas inhalation.

It is worth mentioning that the Israeli High Court considered the path of the wall in Bil’in illegal and in 2007 ordered Israeli government to be rerouted, which could return 800 dunums* of the 2,300 dunums that have been seized to construct the wall and the nearby settlement. However, Israeli army still refuses to remove the wall.

In the nearby Nil’in village, the protest this week ended peacefully. Villagers and their supporters marched to the wall and protested for some time. The group left without confrontation from the Israeli army.

In the central West Bank village of an-Nabi Saleh, locals and internationals joined the demonstration, although many people from outside the village were prevented from entering by the military. The troops also fired tear gas and sound bombs. The protest ended later in the afternoon.

In the village of al-Ma’sara, protesters were stopped by the Israeli army at the entrance of the village, before they reached the lands taken to build the wall. Soldiers also used tear gas to force people back to the village.

*1 dunum equals approximately one quarter of an acre.