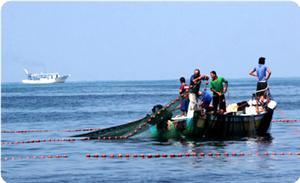 Israeli navy detained, on Tuesday morning, an unspecified number of Palestinian fishermen who were fishing off the coast of Gaza City, local sources said.Gaza’s Ministry of Agriculture confirmed that the fishermen reported the detention after their boat was approached by Israeli warships. The men were apprehended and taken to an unknown location for interrogation.

The ministry of Agriculture criticized the abduction of the fishermen from Gaza waters, calling on human rights groups and the Red Cross to intervene to secure their immediate release.

According to an Israeli spokeswoman, the boat refused to stop when the navy ordered them to turn around after signaling they had ‘deviated from the fishing area’.

Israel maintains a three nautical mile fishing limit, enforced since the 2008 military offensive launched on the Gaza Strip. Before the war on the coastal enclave, a six nautical mile limit was imposed by Israel after the Hamas government was elected in 2006. During the Oslo accords, the fishing limit for Gaza that was agreed upon was 20 nautical miles.