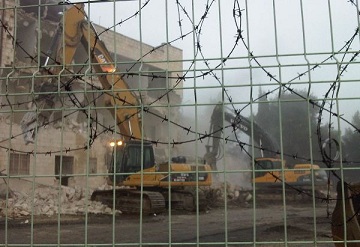 The office of Israeli Prime Minister, Benjamin Netanyahu, issued an official statement defending the demolition of East Jerusalem Arab Hotel “Shepherd”, and challenging international condemnations in this regard. The Hotel, located in Sheikh Jarrah Arab neighborhood in occupied East Jerusalem, was demolished by Israel on Sunday.

In the statement, Netanyahu said that Jews must be encouraged to buy property in East Jerusalem, and should be allowed to rent or buy property especially in neighborhoods that have Jewish majority.

He added that “nobody should expect Israel to prevent the Jews from buying private property in Jerusalem”.

“There isn’t a single democratic government in the world that has ever prevented the Jews from buying property”, Netanyahu said, “Nobody should expect Israel to start doing that”.

The Hotel is owned by members of the Al Husseini family, an Arab-Palestinian family, indigenous to East Jerusalem.

Meanwhile, EU Foreign Chief, Catharine Ashton, slammed the demolition of the hotel and stated that the European Union considers all Israeli settlements illegal.

In her statement, Ashton said that Israel demolished the hotel in order to build a new illegal settlement.

She added that settlements jeopardize the efforts to resume the peace process, and that East Jerusalem is part of the Palestinian territories occupied by Israel in 1967, and that the EU does not recognize the annexation of the city.

U.S Secretary of State, Hilary Clinton, stated that the demolition of the hotel harms the peace process and described it as a “worrisome development”.

Spokesperson of the Israeli Foreign Ministry, Yigal Palmor, told the France Press that describing Jerusalem as a settlement is a “misunderstanding”, and an “insult to the history of the city”.

Palmor claimed that the hotel was built on a private property, and that “diplomacy has nothing to do with the issue”.

The British Consulate Jerusalem, located close to where the hotel stood, issued a statement condemning the demolition and describing it’s as a provocation.

It said that such measures obstruct the efforts to resume peace talks between Israel and the Palestinians, and could lead to “unnecessary repercussions and tension”.