67 Palestinians Kidnapped Since Start of 2011 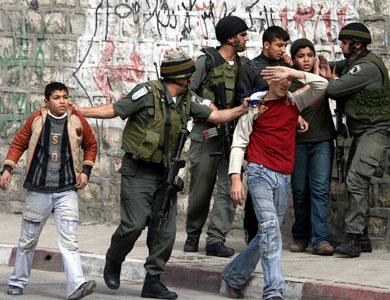 According to an official report, Israeli forces have arrested 67 Palestinians since the first day of 2011, among them are 13 minors and 3 fishermen, the Palestinian Information Center reported Monday.The figure revealed in the report that was released by the Ministry of Detainees in Gaza, includes the five detainees who were released from P.A jails in the West Bank after a 42-day hunger strike, Ministry’s spokesman Al-Ashqar said on Monday.

Al-Ashqar indicated that, as part of the 67 Palestinians rounded up are Sheikh Ahmad Salatna, director of a charitable organization in Jenin, three members of Beit Reema municipal council, and former prisoners.

He added that two of the minors arrested, aged 6 and 7 years old respectively, were abducted in Jerusalem’s Old City for allegedly hurling stones at Jewish settlers.

The spokesman also called on the international community to demand Israel to refrain from other indiscriminate detentions of Palestinians.