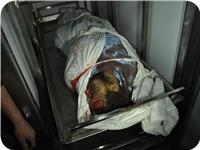 Palestinian medical sources in the Gaza Strip reported Tuesday evening that a Palestinian fighter was assassinated and another resident was injured in an Israeli Air Strike targeting the fighter in Khan Younis, in southern Gaza. The fighter, who was riding his motorcycle when a missile fired by the Israeli Air Force struck him, was identified as Jamil Al Najjar, 25. He was identified as a member of the Al Quds Brigades, the armed wing of the Islamic Jihad.

The Al Quds Brigades vowed retaliation and stated that its retaliation’s time and place will be determined in time.

The Israeli Army confirmed the assassination and claimed that Al Najjar was planning “a major attack in Israel”.

Israeli Defense Minister, Ehud Barak, stated during a visit to the Kissufim military base, near the Gaza border, that Israel will not hesitate in “retaliating” to any attack, and added; “Hamas and the Islamic Jihad should not test Israel”.

Barak added that should Hamas and the Islamic Jihad choose to test Israel, the army – the Southern Command, will retaliate, and “there will be more casualties on the Palestinian side”.

Israeli Ynet News reported that a homemade shell was fired from Gaza into an open area south of Eshkol causing no damage or injuries.

Meanwhile, the Hamas movement in Gaza urged resistance groups to stop the firing of homemade shells into Israel.

Hamas spokesperson, Taher Al Nunu, stated that the ceasefire has been in place since two years, and that the movement is interested in maintaining it as “it serves the interests of the Palestinian people, and prevents Israeli attacks on Gaza”.