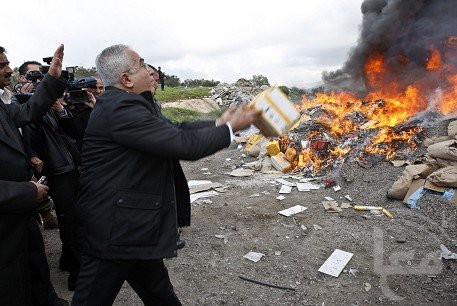 Analysts working for the Israeli TV, Channel 2, accused Palestinian Prime Minister, Dr. Salaam Fayyad, of leading a campaign targeting Israeli products in general and not only products of Jewish settlements in the occupied territories. Channel 2 started its main news broadcast Tuesday by stating that the “campaign led by Fayyad is no longer focused on settlement products, but is now calling for boycotting all Israeli products”, the Maan News Agency reported.

Siegel also claimed that this campaign is receiving wide coverage by the Palestinian TV, and that “what angered Israel the most, is that the campaign is being conducted using French financial support”.

Furthermore, Israeli Jerusalem Post reported that boycott advertisement on the official Palestinian Television are funded by the Spanish government and a number of Spanish NGO’s.

The Palestinian Authority decided in early 2010 to consider working in Israeli settlements and trading settlement-made products as illegal by law.

Palestinian President, Mahmoud Abbas, approved the law which will subject merchants who sell settlement products to up to five years imprisoned, and high fines.

Israel waged an international campaign to counter the movement and even considered it as “illegal and immoral”, yet, BDS (Boycott, Divestment and Sanctions) campaigns are legitimate forms of resistance and proved effectiveness in countering the apartheid regime in South Africa, and several other areas around the world.

The Israeli government claims that the BDS movement aims at “delegitimizing Israel among the international community”.