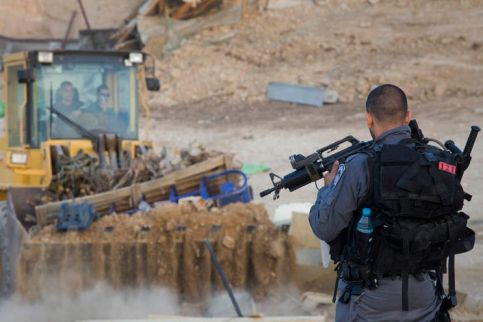 Israeli bulldozers demolished 11 structures in the ‘unrecognized’ village of al-Arakib for the ninth time on Sunday. Land Administration officials arrived at the village accompanied by police officers. Residents tried to disrupt the demolition work and clashed with police.

Five people sustained light injuries from pepper spray and paint balls fired by police during attempts to disperse the crowd. They were evacuated to the Soroka Medical Center in Beersheba.

Knesset Member Talab El-Sana was among those who tried to prevent the demolition. ‘This is fascist-Nazi policy,’ he said. ‘The state is pushing its Bedouin citizens to the point where they may launch a popular intifada, which will have severe results.’

‘What’s happening here is a gradual ethnic transfer of the Negev’s Bedouins,’ said the MK.

Land Administration official Shlomo Tziser said the state was seeking a permanent solution to the al-Araqib issue. ‘Of course the demolition was carried out in accordance with a court order,’ he said.

According to a recent Electronic Intifada article, Israel plans to convert Al-Araqib and the area surrounding it into a ‘God-TV Forest.’ A Christian evangelical television channel called God-TV has donated $500,000 to the Jewish National Fund (JNF). The money is intended for planting a million trees over a large area of the desert that is home to residents of al-Araqib and other Bedouins in the Negev.