Cement, 20 New Vehicles, To Be Allowed Into Gaza 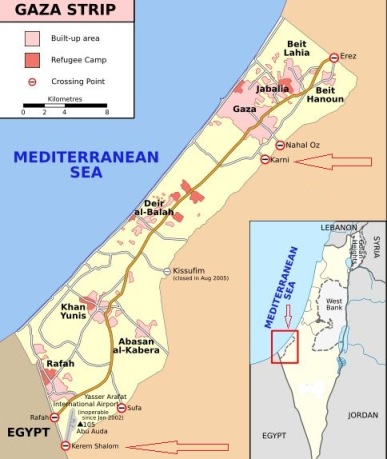 The Israeli Authorities Decided on Thursday to allow twenty 20 new vehicles into the Gaza Strip via the Karem Abu Salem (Kerem Shalom) Crossing, in addition to allowing the entry of construction supplies to be used by international organizations operating in Gaza.Raed Fattouh, Palestinian Liaison Official at the Border Crossing Authority in Gaza, reported that Israel decided to allow 190 to 200 trucks loaded with aid that would be delivered to the local Trade, Agriculture and Transportation sectors.

The official said that Israel also agreed to allow six trucks, loaded with strawberries and flowers, to leave Gaza in order to be exported to Europe.

Israel also allowed two trucks filled with strawberries to leave, and allowed 68320 kilos of propane into the coastal region.