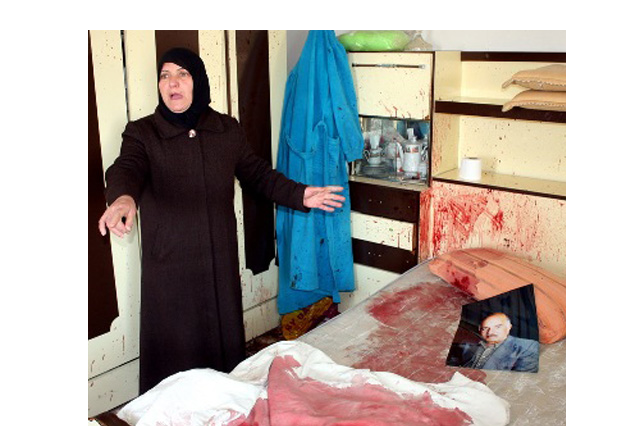 The Israeli Army reported Wednesday that the soldier who repeatedly shot a 65-year-old Palestinian man, while he slept in his bed on January 7th, has been exonerated, while the soldier who repeatedly shot the dead man was discharged without facing any charges. The attack took place in the southern West Bank city of Hebron.The Army said that the unit that carried out the attack intended to arrest five Hamas members who were released from a Palestinian security center one day before the incident took place.

Omar Al-Qawasmy, 65, was sleeping in his bed when the soldiers broke into his home on Friday at dawn, January 7th, and opened automatic fire immediately after breaking into the room.

Despite the fact that Al Qawasmy was killed, a second soldier fired several rounds at his body.

Head of the Central Command of the Israeli Army, Avi Mizrachi, said that the soldier acted according to the procedures manual, therefore, he will remain in his post without any demotions and legal measures, while the second soldier will be discharged from military service.

Omar’s wife, Sobhiyya, was not in bed during the attack as she was preparing to conduct dawn prayers.

The army claims that one of the soldiers decided to open fire after Al-Qawasmy made a “suspicious move that made him believe his life was in danger”.

The army report did not take into consideration that the man was fast asleep when the soldiers broke into his room and that such a reaction of panic or “suspicious move”, is natural”.

The investigation also concluded that the second soldier who also opened fire at Al Qawasmy acted unprofessionally and therefore was discharged from army service.

At the end of its report, the army said “it is sorry” for the death of Al Qawasmy.

Soldiers Shot and Killed an Elderly Man While Sleeping In His Bed
Friday January 07, 2011 09:11author by Saed Bannoura – IMEMC & Agencies

Israeli soldiers broke, on Friday at dawn, into the house of Omar al-Qawasmy, 66 years old, in al-Sheikh neighborhood in the southern West Bank city of Hebron, and shot him dead as he slept in his bed, local sources reported.

His son, Raja’ey stated that the soldiers broke into the home, directly headed to the bedroom of his parents, and fired several rounds that riddled his upper body and face.

Raja’ey added that his mother was not hurt as she was conducting dawn prayers. The soldiers forced her into the room of her disabled son, and proceeded to kill her husband.

He further stated that the soldiers were after resident Wael Mohammad al-Beitar, who lives in the first floor.

The son added that after the soldiers left the house, the family found the body of Omar soaked with blood and riddled with bullets. Raja’ey said that the soldiers apparently used a gun with a silencer in the killing of his father as gunshot sounds were never heard.

“The soldiers apparently thought al-Beitar lived in the second floor”, Raja’ey said. “That is apparently why they opened fire the moment they broke into the room; they did not bother checking his identity”.

Al-Beitar, along with five other Hamas members, was released from a Palestinian prison on Thursday following a direct order made by President Mahmoud Abbas. He is one of hundreds of Hamas members imprisoned by the Security Forces of Mahmoud Abbas.

They were all arrested last September and were imprisoned at a Palestinian detention facility in Hebron.

The five members were kidnapped by the Israeli Forces during the attack. They were identified as Majdi Obeid, Ahmad Oweiwy, Mohannad Neiroukh, Wisam al-Qawasmi and Mohammad Souqiyya.