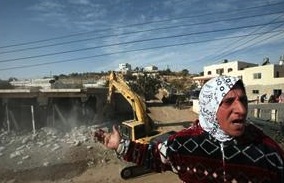 Israeli soldiers invaded on Wednesday “Khirbit At Taweel”, a small village near the northern West Bank city of Nablus, and handed the residents military orders to demolish their clay homes by Thursday. The village is “unrecognized” by the Israeli occupation, and its homes were demolished six times so far.

The residents fear that the army and the police were intend to invade the village to demolish the homes on Thursday.

It is worth mentioning that at least 7000 Dunams of village lands were taken away from the residents due to Israel’s construction of illegal settlements on village lands.

The villagers are mainly shepherds who make a living by selling local made dairy products and meet. The areas they live in are also green and considered among the best grazing sites in the occupied West Bank.