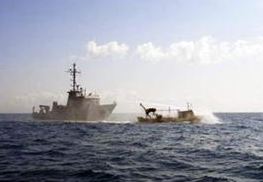 The Israeli Navy kidnapped attacked late on Wednesday at night a Palestinian fishing boat in Palestinian territorial waters, near Khan Younis, in the southern part of the Gaza Strip, and kidnapped four fishermen. The four were taken to an unknown destination; they were identified as Ahed Abu El Kheir, his brothers Ahmad and Nidal, and Moneer Al Aamoudi.

The Palestinian Fishing Authority at the Minister of Agriculture, slammed the ongoing Israeli military attacks against the fishermen who are trying to make a living to support their families.

It added that Israel only allows Palestinian fishermen 3 nautical miles, yet repeatedly attacks them inflicting dozens of casualties and conducting several arrests.

There are nearly 3500 Palestinian fishermen in Gaza, they own approximately 700 fishing boats and supporting more than 70.000 residents.

The Ministry called on different international organizations and human rights groups, headed by the Red Cross, to intervene and stop the Israeli violations against the fishermen and their equipment.

It added that Palestinian fishermen must be granted 6 nautical miles in order to be able to fish.