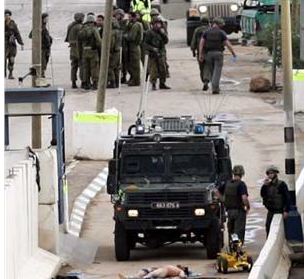 Israeli soldiers shot and killed, on Thursday at noon, a Palestinian youth near the Dotan military roadblock, near the Mivo Dotan illegal settlement, south of the northern West Bank city of Jenin. The slain youth, identified as Salem Omar As-Sammoudi, aged 24, from Yamoun in the Jenin district, was said to have opened fire on Israeli forces manning the roadblock.

Israeli Ynet News reported that a preliminary investigation into the shooting indicated that the Palestinian allegedly approached the roadblock carrying a Kalashnikov rifle and opened fire at the soldiers who fired back and killed him.

No injuries were reported among the soldiers.

An army source told YNET that the soldiers acted in a professional manner. Medical sources said the body of the man was transported to the Jenin Hospital.