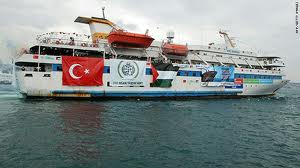 According to the Jerusalem Post a source working closely with the Turkel Committee said on Thursday that its members were likely to find Israel innocent of war crimes when they release a report of its conclusions.
The attack by Israeli forces on the Turkish ship, Mavi Marmara in May 2010, in which nine Free Gaza activists were shot dead, had been met with worldwide condemnation.

The ship, part of a large flotilla carrying humanitarian supplies and international activists, was prevented from reaching the people of Gaza.

Israel claimed it was acting in self-defense at the time by preventing a breach of its siege of the Gaza Strip.

In response to international calls for an independent inquiry into the killings, Israel set up its own commission of inquiry – the Turkel Committee.

A report of the committee’s conclusions will be released next Monday. It will focus on whether the blockade imposed by Israel on Gaza was legal and whether it complied with international law.

According to the source, the main conclusion will likely be that the way in which the IDF took control of the Mavi Marmara aid ship was in accordance with the rules of international law.