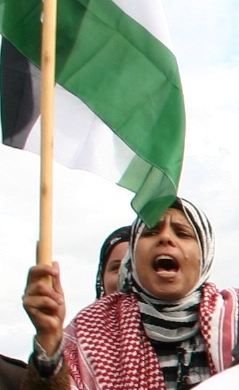 The Israeli army issued a report claiming that Jawaher Abu Rahmah, who was killed by the army more than two weeks ago during a nonviolent protest against the Wall in Bil’in village, near Ramallah, died due to a previous health condition. Urgent care reports at a local medical center stated otherwise.A report prepared and published by the Israeli army claimed that the soldiers had nothing to do with Abu Rahma’s death , and that the gas fired by the soldiers did not lead to her death.

The army claimed that Abu Rahma died of a “faulty medical care at the Palestinian hospital”, and not due to “crowd dispersal methods” used by the soldiers, Israeli Ynet reported.

The army added that local doctors failed to properly diagnose Abu Rahma, and gave her large amounts of atropine “that led to her death”.

Furthermore, the army claimed that the gas used by the soldiers “does not lead to death”, and that the Palestinians are using the issue to their advantage.

But the local medical report indicated that, prior to that day, Abu Rahma did not suffer from any health condition that could endanger her life, and had no known allergies.

The report stated that she inhaled gas fired by the Israeli army during the protest, and died later on at the local medical center after showing signs of sweating, frothy secretion and consciousness salivation.

Also, medics who provided Abu Rahma with first aid before moving her to the medical center, stated that after the army fired several gas bombs, the mother of Jawaher noticed that she started to feel unwell after inhaling the gas.

The two women then moved backwards to avoid the gas, and soon afterwards Jawaher vomited and collapsed.

A witness from the village also reported that, after inhaling the gas, Jawaher became week, vomited and collapsed before she was carried to a nearby home, 40 meters away, at that stage her mouth became foamy.

Local medics provided her with urgent care and immediately took her to hospital.
Saher Bisharat, the ambulance driver, stated that Jawaher was still conscious and managed to answer some questions asked by the medics.

Some of her last words were that she chocked after inhaling gas fired by the Israeli soldiers.

Mohammad Aida, director of the Ramallah Health Center where Jawaher received health care, stated that the woman developed lung failure resulting from tear gas inhalation before this condition led to a heart attack that took her life.
Abu Aida confirmed that she did not suffer from any preexisting conditions, and that the cause of death is tear gas inhalation.

“They are spreading these lies and invented narratives via the media, which is not bothering to do basic fact checking”, Al Khatib said, “Our version is supported by named sources and medical documents. In a properly functioning society, the army’s version, which has been spread by anonymous sources, would not be considered worthy of publication”.