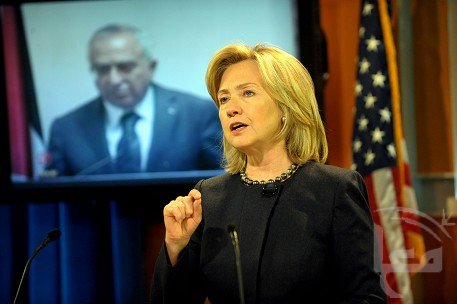 U.S Secretary Of State, Hilary Clinton stated Thursday that the White House rejects the proposal that was submitted by the Palestinian Authority to the United Nations in an attempt to condemn Israel’s settlement activities in the occupied territories. Clinton said that the United States had no doubts that this proposal does not help the efforts to resume the stalled peace talks between Israel and the Palestinian Authority.

She stated that the U.S. Administration opposes Israel’s settlement activities but added that both Israel and the United States must reach a settlement through negotiations and not through the United Nations or any other international body.

Responding to a question while talking to reporters at the White House, Clinton did not clearly said whether the U.S. will use the Veto power at the security council should the proposal is submitted to the United Nations.

Also on Thursday, British Foreign Secretary, Alistair Burt, stated that his country rejects a “one-sided” declaration of the state, and added that this state should be created through direct peace talks.

Yet, he hinted that his country could vote for the Palestinian proposal that condemns Israel’s settlement activities in the occupied territories, but added that London “cannot recognize a state that has no borders and no capital”.