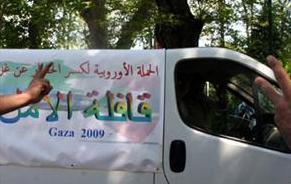 The Israeli Authorities allowed on Thursday evening the Al Quds 5 solidarity convoy to enter the Gaza Strip via the Rafah Border Terminal, in the southern part of the Gaza Strip.The convoy includes sixteen solidarity activists delivering urgently needed medical supplies and a number of ambulances.

The convoy, sent by the Libyan Permanent Private Committee to Support the Palestinian People, and the General Union of Banks in Libya. It is headed by Nouri Abdullah Al Shahawi, secretary-general of the Union of Gold and Precious Metals.

The International Committee Against the Siege on Gaza slammed the ongoing Israeli blockade and the ongoing violations against its residents. It also slammed Israel’s decision to reduce the amounts of propane, wheat and essential supplies sent the besieged coastal region.

In a press release, the Committee called for lifting the illegal siege on Gaza, and for exposing what it called “the ongoing Israeli crimes and violations to the International Law”.

Several days ago, a number Wheat Mills and most propane gas stations had to shut down after running out of all supplies due to Israel’s rejection to allow imports.

On Wednesday, Ken O’Keefe, senior member of the Gaza-bound Road to Hope aid convoy, announced further plans to head to Gaza in an attempt to break the Israeli siege and deliver humanitarian and medical supplies.

O’Keefe, is a former U.S. Marine and one of the activists who were on-board the Mavi Marmara solidarity ship that was attacked by the Israeli Navy on May of last year. He joined the Road of Hope Convoy in October of 2010.

Speaking to Gaza Community College of Tourism Studies, O’Keefe stated that a number of large ships are being prepared to sail to Gaza to deliver urgent and humanitarian supplies.

He said that the illegal Israeli siege on Gaza has direct impact on the physical and psychological conditions of the students, adding that students are a large and significant segment of the Palestinian society.