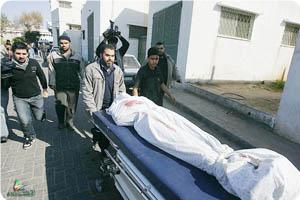 Palestinian medical sources in Gaza reported that a worker was killed and two other were wounded in an explosion that took place near the Israeli border fence east in Al Zeitoun neighborhood East of Gaza City.The sources added that the explosion resulted from an unexploded ordnance dropped by the army in a previous invasion to the area.

The man was killed as Ahmad Na’im Abu Wadi, 22, from Al Zeitoun neighborhood. His body and the two wounded workers were moved to Al Shifa Hospital in Gaza city.

The three were collecting metal and metal from buildings that were bombarded by the army during the war on Gaza. The collecting materials are recycled to be used in construction as the Israeli siege left the Gaza Strip without basic supplies.

The Israeli army issued a statement denying any connection to the incident, adding that soldiers “reported no activities near Gaza on Saturday”, Israeli daily Haaretz reported.

It is worth mentioning that 13 Palestinians were killed in a number of Israeli strikes targeting the Gaza Strip in December.

The Israeli army claims that Palestinian fighters have stepped up their attacks along the border between Gaza and Israel.