Two Settlers, Detained By P.A Police In Nablus, Handed Over To Israel 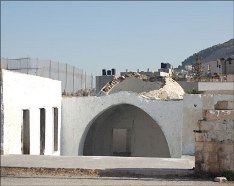 After a group of extremist settlers went to the northern West Bank city of Nablus reportedly to visit Joseph’s Tomb, when Palestinian police arrested two of them as they did not coordinate the visit with the Israeli and the Palestinian Coordination Offices. The Israeli army arrested six while the two arrested by P.A police were later handed to Israel.The incident took place on Saturday at night after more than 15 armed settlers invaded Kufur Qaleel village near Nablus while on their way to Joseph’s Tomb. Clashes then took place as a number of Palestinians noticed the armed settlers and hurled stones at them.

The settlers then fled to the Al Quds Street in Nablus, and the Palestinian police managed to arrest two of them before handing them back to the Israeli army.

The Israeli army reported that the settlers claimed the violence “was initiated by the Palestinians”, and that the Israeli Police arrested six teenage settler girls.

The incident started after a group of teenage settlers, affiliated with the Hilltop Youth Movement, marched towards Nablus and were stopped by Israeli soldiers who knew of the attempt to enter the city.

Yet, despite the military deployment, 19 settlers made their way into Nablus through a number of nearby Palestinian villages.

The settlers claim that as they managed to enter Nablus and started walking towards Joseph’s Tomb, a number of Palestinian residents of the city started throwing stones at them as they were meters away from the tomb.

The teenage settlers fled the scene with one minor injury, and “slammed” the Israeli army for “not protecting them” although they did not coordinate the tour.