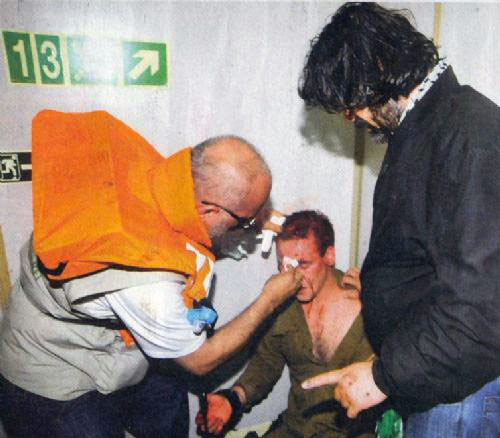 After Israel released a report absolving its forces from wrongdoing in an attack on a humanitarian aid flotilla last year that left nine aid workers dead, survivors of the attack roundly criticized the report Sunday, calling it a “whitewash” and a “farce”.Viva Palestina’s Kevin Ovenden, who was on board the Mavi Marmara when it was attacked by Israeli forces in May last year, said, ‘The claim by Israel’s Turkel Commission that Israeli forces acted legally when they killed nine people aboard the Mavi Marmara, and left another brain dead, will be laughed out of court by all but the Israeli government and its most fanatical supporters.

Ovenden continued, ‘This whitewash commission was set up by the Netanyahu government, the same people who commissioned the assault on the aid ship. It is simply unfeasible to claim that, for example, the two men shot immediately to the left and right of me, were gunned down in some act of self-defence. They were shot from above. No Israeli commando was in sight of us when the bullets rang out.”

He added, ‘Israel has refused an independent international inquiry and instead was brazen enough to establish this farce. No Turkish official, lawyer or representative was allowed to take part…Rather than entertaining this charade from Tel Aviv, the British government should demand that Israel and those responsible for the atrocity of Bloody Monday on the Mediterranean on 31 May last year are held to account and to the same universal standards of justice that are required of other states.”

Other members of the aid flotilla who survived the May 2010 attack were equally harsh in their criticism of the Israeli report. Sarah Colbourne, Director of the Palestine Solidarity Campaign and who was also onboard the Marvi Marmara when the Israeli Defence Force attacked the boat said:

“However hard the Israeli Government attempts to rewrite history, they can’t rewrite the truth. The facts are simple, the Marvi Marmara was carrying essential humanitarian aid like baby milk to the besieged people of Gaza. There were no guns or weapons on board the boat, we were in international waters, when over 300 bullets – or one for every two people on board – rained down on us, killing 9 people and injuring over 50.

She added, “The actions of the Israeli Defence Force and the Israeli Government where by all international standards of law illegal as is their continued occupation of Gaza and the oppression of the Palestinian people.”

The Turkel Commission was created by Israel to conduct an investigation of the attack by Israeli commandoes on the Gaza aid flotilla last year that left nine people dead. The report it released on Saturday found no wrongdoing by Israeli forces during the attack. None of the Gaza flotilla aid workers who survived the attack were interviewed by the commission, which based its findings solely on the testimonies of Israeli officials and soldiers.