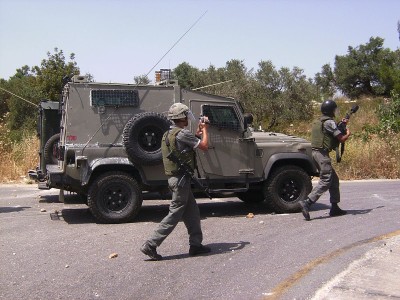 On Sunday night, the Israeli army raided the Palestinian village of Nabi Saleh for the third time in two weeks and arrested a 14 year old boy.Last week, the army raided over twenty Nabi Saleh homes, photographed youth and collected their ID information. Last night, between the hours of two and three in the morning, soldiers raided homes and arrested one 14 year old child, Islam Tamimi. Soldiers attacked the child in his bed and attempted to arrest his older brother. One Palestinian working with Btselem tried to photograph the soldiers but was threatened with violence. Luckily, family members and other villagers were able to prevent the older brother from being arrested.

Nabi Saleh, a small village west of Ramallah, has used non-violent demonstrations to resist the confiscation of their land by the neighboring Jewish settlement of Halamish for the past year. There have been countless injuries, arrests and collective punishment against the village over the past year with the aim of crushing the resistance.

Three weeks ago, Tamimi was taken by soldiers during a Friday demonstration to the neighboring Jewish only settlement of Halamish. He was handcuffed behind his back and left in the pouring rain for hours before being questioned about the demonstrations, their leadership and strategy.

Tamimi is still in Israeli custody and no crime has been filed against him.

Villagers believe that Tamimi was arrested last night in order to dig up more information about the demonstrations in Nabi Saleh. This is a part of a broader strategy of psychological repression of the village and a harsh form of collective punishment. Ironically, the army spokesperson unit tweeted this morning that a ‘wanted suspect’ had been caught in the West Bank and taken for questioning.

Last night’s arrest comes days after villagers were able to break the weekly Friday siege of Nabi Saleh. The demonstration began in the neighboring village of Beit Riman, instead of beginning in the center of the village. From Beit Rima the march went directly through the army post near the contested spring which was taken over by settlers and the army in December 2009.