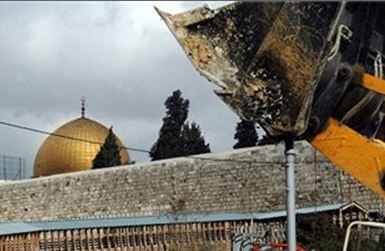 Uzi Dahari, in charge of the so-called Israeli Antiques Authorities, stated on Monday at night that the digging of a tunnel that links Silwan Arab town in East Jerusalem with the “western wall” of the Al Aqsa Mosque, was concluded. Dahari claimed that the digging and constructions under the Al Aqsa Mosque “carried no political significance”, and claimed that the whole process is “nothing more than archeological excavations permitted by law”.

Dmitri Diliani, member of the Revolutionary Council of the Fateh Movement headed by Mahmoud Abbas, said that the excavations are only a maneuver and a cover-up for a large-scale Israeli plan that violates the religious and historic rights of the Palestinian people, and the history of occupied East Jerusalem.

Diliani added that the Israeli Antiques Authority receives most of its funding from settler-led organizations and groups that support Israel’s illegal settlement activities and its violations against the Palestinians and their holy sites.

He further stated that the concluded tunnel is only one of many tunnels run mainly by the El-Ad Settler Organization, and other fundamentalist groups supported by the Israeli government in their plans, including in the plan to create a network of tunnels under the Al Aqsa Mosque, Silwan town and several parts of the historic Old City of Jerusalem.

Diliani warned that the excavations violate the International Law as they pose a direct danger to the foundations of the Al Aqsa Mosque and have already cased cracks in the western and southern walls of the Al Aqsa mosque.

He also said that the excavations also caused cracks and damages to several old Arab homes in the Old City and that part of an UNRWA school for girls had collapsed in 2009 due to the digging as the school is close to the western wall of the mosque.

In September of 2009, the Israeli High Court rejected an appeal filed by residents of Silwan against the digging as it caused damages to their homes. The court also lifted for one year the ban on excavations in the area.

The Palestinians seek East Jerusalem as the capital of their anticipated state; it was illegally occupied by Israel after the 1967 six-day war in which Israel also occupied the West Bank and the Gaza Strip.

In November of 1967, the United Nations Security Council passed resolution 242 which calls for Israel’s withdrawal from the occupied territories.

In 1980, the Israeli Knesset declared Jerusalem, “complete and united” which means both East and West Jerusalem, as the capital of Israel.

Although this decision was regarded as null and void by the United Nations Security Council Resolution 478, East Jerusalem remained under Israeli occupation, and Israel still refuses to hold talks on the future of the occupied city.