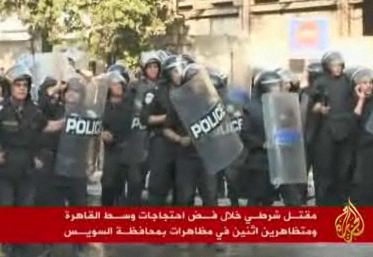 As massive protests swept across Egypt demanding the removal of Egyptian President, Hosni Mubarak, and his government, two protestors and one police officer were killed, the Qatar-based al-Jazeera network reported.Thousands of protestors marched in Cairo and were met by police violence throughout the day, Tuesday, especially in Tahrir Square, in the center of Cairo.

The police fired tear gas and rubber-coated metal bullets at the protestors and used water cannons inflicting dozens of injuries, including a cameraman working for al-Jazeera.

The protests were peaceful and massive, but the police and the Egyptian security forces used excessive force against them and started the attack by firing dozens of gas bombs.

A police officer was reportedly killed after being hit in his head with a stone hurled by a protester during an earlier protest in Tahrir Square. At least 30 protestors were arrested.

In Suez, two protestors were killed after the police violently attacked a massive protest held there. According to Egyptian sources, one of the killed had respiratory problems and died after inhaling gas fired by the Egyptian Security Forces.

The massive protests also swept through Alexandria, and the Nile cities of Tanta and al-Mansura, in addition to Aswan and Asyut, south of Egypt.

As the protests swept throughout the day and continued at night on Tuesday, the Egyptian Interior Ministry issued an official statement casting blame on the Muslim Brotherhood, the largest opposition party that was banned by Cairo.

Al-Jazeera reported that the Muslim Brotherhood denied the accusation and said that it does not intend to intervene in the protests.

Commenting on the situation in Egypt, U.S. Secretary of State, Hilary Clinton, said that the “government in Cairo is stable”.

Mubarak’s regime is considered one of the closest Arab allies to the United States in the Middle East.

Government corruption, poverty, unemployment and oppression practiced by the Egyptian regime pushed the fed-up Egyptians to take off to the streets while more than 80,000 person signed a growing petition on Facebook to participate in the protests and overthrow the Egyptian regime.

The group stated that the protest “is the beginning of the end”, and that “the people in Egypt are fed up with Mubarak and his dictatorship, torture chambers and economic policies”.

Amnesty International called on the Egyptian Government to allow the peaceful protests.

Mubarak has been in power for three decades and his U.S. backed policies are renowned for the brutal use of force against the opposition and against attempts to achieve real reform and change that could provide livelihood to the majority of Egypt’s impoverished citizens.

In related news, dozens of Egyptian held a protest on Tuesday, in front of the Egyptian embassy in London demanding reforms and improving the living conditions in Cairo.

They chanted slogans calling for overthrowing the government in Egypt, reforms and fair elections that represent the people.