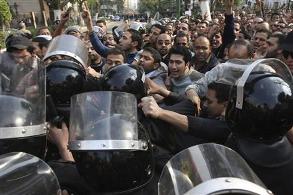 As the massive protests against the Egyptian regime of America’s ally, Hosni Mubarak, continued in Cairo and several other Egyptian cities, the Egyptian Police and Security Forces have escalated their violence against the protesters in an attempt to end them. The Qatar-based al-Jazeera reported that clashes continued throughout Cairo, and despite relative calm overnight, the protests are expected to continue during the day Thursday.

Former Director General of the International Atomic Energy Agency (IAEA) and president-hopeful, Mohammed ElBaradei, stated that he is going back to Cairo to join the protests with the rest of the Egyptian people.

The Nobel-prize winner who lives in Vienna said that the regime of Mubarak does not seem to understand that with the massive number of people protesting “things good turn ugly”.

Al-Jazeera English reported that Ali, the brother of ElBaradei, will be landing in Cairo on Thursday night in order to attend a protest planned after Friday morning prayers.

The massive protests that seem to be inspired by the latest events in Tunisia and the removal of its president. The protesters are making their message clear regarding their rejection to the government ban on political rallies and the ban on opposition groups.

Thousands of protesters in Egypt are determined to continue their protests in a number of main Egyptian cities, in order to express their anger and rejection to the 30-year-old regime of Mubarak.

The Egyptian Police and Security Forces rounded up more than 860 protesters while at least six persons were killed since the protests started. The number of injuries continue to rise as the police continues the use of excessive forces against the protesters.

Yet, al-Jazeera English correspondent in Egypt, Dan Nolan, stated that the police and security forces have, so far, been unable to end the protests despite the arrests and the excessive use of force.

The protesters managed to make use of social networks such as Facebook and Twitter in coordinating their demonstrations while calls for a big protest on Friday managed to gather at least 24,000 Facebook supporters just a few hours after being posted on the social network site, al-Jazeera added.

Bloggers and web activists are playing an important role in keeping the public in Egypt and around the world informed while emerging reports revealed that the Egyptian government is blocking internet access and jamming cellphone networks.

The United States official stance remained the same considering the Egyptian President, Hosni Mubarak, as a close ally to Washington, and an “asset to the peace process”.

U.S. secretary of State, Hilary Clinton, called for calm in Egypt and urged the government to conduct reforms.

While the Egyptian Presidential elections are approaching, the Egyptians believe that the 82-year-old president is preparing his son Gamal, 47, to become the new president of the country.