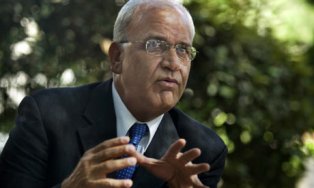 Speaking on the al-Jazeera program “Without Borders,” chief Palestinian negotiator Saeb Erekat named al-Jazeera reporter–and alleged former CIA agent–Clayton Swisher and former MI6 agent Alastair Crooke as the source of the Palestine Papers.Al-Jazeera’s leak of nearly 2,000 documents from 20 years of Israeli-Palestinian negotiations has embarrassed the Palestinian Authority (PA), in particular Erekat and President Mahmoud Abbas, over their apparent willingness to compromise on sensitive points of contention such as Jerusalem and refugees.

Swisher, whose LinkedIn profile notes he has worked for al-Jazeera since November 2007, was labeled by Erekat a “CIA spy.” That accusation has not been confirmed, but the Israeli online newspaper Haaretz reported on Wednesday that Swisher used to work as a bodyguard in the Clinton Administration’s State Department.

According to Erekat, the other suspected leaker, Alastair Crooke, was a prominent agent in the British intelligence service MI6 and a close adviser to several high-ranking E.U. officials. Haaretz reported he is “considered close to officials in Hamas,” the Islamic group ruling Gaza that has benefited considerably from the damage to the P.A. caused by the Palestine Papers.

Erekat demanded that the U.S. Department of State investigate Swisher to confirm that he was the source of the leaks, saying he and al-Jazeera were “inciting against our lives,” referring to his family.

“What al-Jazeera people are doing is asking Palestinians to shoot me physically,” he said. “That’s what they are doing. They are saying: ‘You are guilty and thus you should be executed.’” [sic]

Erekat defended his position on the negotiations, calling the papers “totally baseless” and defying al-Jazeera to “present authentic papers.” He also accused the al-Jazeera host, Ahmed Mansour, of “rudeness and lack of professionalism.