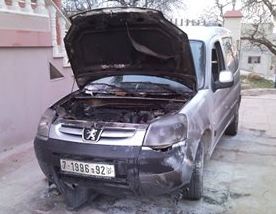 A group of extremist settlers torched, on Thursday at dawn, a Palestinian vehicle in Einabus village, near the northern West Bank city of Nablus.The vehicle was torched at approximately 3 am. The perpetrators spray-painted ‘Eye for an eye – we won’t forget’ in Hebrew next to it. The graffiti refers to a small illegal settlement that was evacuated by the army.

Ghassan Douglas, in charge of Settlement Files in the northern Part of the West Bank stated that a number of settlers of Yitzhar settlement, south of Nablus, torched the car of Bassam Yousef Rashdan while it was parked in front of his home.

Two days ago, the settlers attacked the same village and torched a bulldozer owned by a local resident.

The Israeli Police arrived at the scene and initiated a probe into the incident but did not conduct any arrests among the settlers.

The police believes that the settlers are avenging a recent order to demolish a number of illegal buildings in Bat Ayin settlement.

The settlers launched a number of attacks under what they call “price tag” targeting Einabus and other Palestinian villages near the Yitzhar illegal settlement.