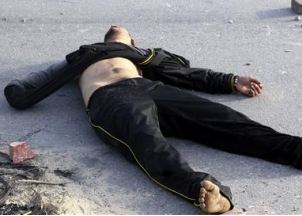 A young Egyptian man was shot and killed by Egyptian Security Forces fire during clashes that took place in in front of Sheikh Zweid Police station in Sinai. A Police officer was also killed during clashes with protesters in Suez. Protests were also reported in Yemen demanding the removal of its president.The massive protests in Egypt demanding reform and the removal of President Hosni Mubarak continues, while at least five Egyptians were killed and dozens were injured.

Egyptian sources reported that Mohammad Atef, 22, was shot in the face by Egyptian police fire in front of Sheikh Zweid Police station in Sinai, and died of his wounds.

The sources added that the police fired live ammunition and gas bombs at the protesters who hurled stones at them.

The protesters, who marched peacefully before coming under fire, were demanding the release of several residents who were detained by the police for participating in the protests.

Furthermore, a police officer was killed on Thursday during clashes with protesters in Suez city.

The officer was killed by a round fired from a hunting rifle, and died of his wounds while being transferred to a hospital in Cairo.

Eyewitnesses reported that a fire took place at the Fire department in Suez and at least three fire trucks were completely burnt.

Another fire, resulting from the clashes, also took place at a police station in Al Arbaeen neighborhood in Suez. Similar fires were reported in a number of government-run facilities.

Another protest took place Thursday in Al Ismaeliyya, north of Suez, as more than 600 residents took off to the streets and were met by police violence.

The police in Suez said that eight policemen were injured in the clashes, and that one of them is in a serious condition.

Former Director General of the International Atomic Energy Agency (IAEA), Mohammed ElBaradei, stated after arriving in Cairo on Thursday that the time has come for president Hosni Mubarak to retire.

ElBaradei, 68, left Vienna to join the protests against the regime of Mubarak, one of America’s closest allies in the Arab world.

The United States official stance remained the same considering the Egyptian President, Hosni Mubarak, as a close ally to Washington, and an “asset to the peace process”.

U.S. secretary of State, Hilary Clinton, called for calm in Egypt and urged the government to conduct reforms.

While the Egyptian Presidential elections are approaching, the Egyptians believe that the 82-year-old president is preparing his son Gamal, 47, to become the new president of the country.

Tunisia was the starting point for massive popular protests demanding the removal of overdue regimes, while its president Zein el Abidine Ben Ali had to flee the country on January 14.

On Thursday, 12 new ministers were named to the Cabinet in Tunisia while ministers linked to the former president were removed from their posts.

In Yemen, thousands of residents held massive protests at the capital, Sanaa, demanding real political and social reforms in the country stricken by poverty and ruling-class corruption. The also demanded President Ali Abdullah Saleh to step down.

Opposition parties in Yemen issued statements demanding the police and the army not to intervene.

The main protests were held in four districts in the capital, and were described as
massive and well organized.