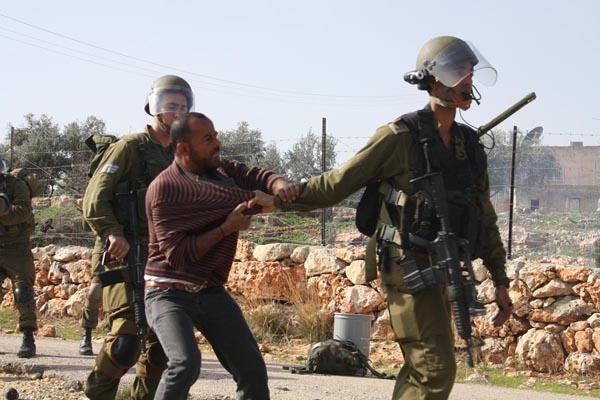 Israeli forces conducted 37 incursions into Palestinian communities in the West Bank, during which they abducted 22 Palestinian civilians, including 7 children.

In the West Bank, Israeli soldiers positioned at ‘Mavi Dutan’ checkpoint to the south of Ya’bad village, southwest of Jenin, fired at a Palestinian man who was near the checkpoint. As a result, he was wounded by 3 bullets, and Israeli forces denied him access to medical treatment for several hours. Later, Israeli forces claimed that a gunman fired at Israeli soldiers, who repeated fire and killed him. The al-Quds Brigades (the armed wing of Islamic Jihad) stated that the victim was one their members who had gone to the checkpoint carrying a machine gun to attack Israeli soldiers there.

On 23 January 2011, a Palestinian civilian was wounded by the Israeli police in Hares village, north of Salfit. On the same day, Israeli soldiers opened fire at a civilian vehicle that was transporting a number of Palestinian workers near Hebron. Two workers were wounded.

During the reporting period, Israeli forces used excessive force to disperse peaceful demonstrations organized in protest to Israeli settlement activities and the construction of the annexation wall. As a result, two Palestinian civilians, including a child, were wounded, and dozens of Palestinian civilians and international human rights defenders suffered from tear gas inhalation or sustained bruises.

Israeli forces have continued to take measures at creating a Jewish majority in Jerusalem. On 24 January 2011, deputy director of the Israeli antiquities authority declared the completion of the establishment of a tunnel linking Silwan village to the south of the old town of Jerusalem with the area located near the western wall for the al-Aqsa Mosque. He claimed that ‘there is no political drive for the establishment of the tunnel, rather it is the outcome of archaeological excavations in accordance with the law. The tunnel is 600 meters long. The Israeli antiquities authority claims that it used to be ‘a canal for the discharge of rainwater under a main road in the city. According to Wadi Hilaw Center in East Jerusalem, excavations are funded by ‘El’ad’ settlement association, which controls all tourist sites in Silwan village. The excavations have caused damages to Palestinian civilian property, including houses, a school, a nursery, a mosque and a number of road.

During the reporting period, Palestinian civilians from Silwan village to the south of the old town of Jerusalem sated that they found a notice printed in Hebrew and signed by the Israeli mayor of Jerusalem and the head of the planning and construction committee in the Israeli municipality of Jerusalem, stuck on walls of a number of houses and shops. The notice, dated 03 August 2010, states that the municipality intends to confiscate more than 4,500 square meter of land for public purposes. According to the notice, owners of these lands can appeal the decision within two months — even though the notices were posted six months after the date listed on them.

In the Gaza Strip, on 22 January 2011, a Palestinian civilian was killed and another two ones were wounded by the explosion of a projectile left by Israeli forces nearly one kilometer away from the border between the Gaza Strip and Israel. The three civilians were collecting scraps of construction materials in the area.

On the same day, a Palestinian farmer was wounded by Israeli soldiers in the east of Gaza City.

In the Gaza Strip this week, Israeli forces conducted 3 limited incursions into Palestinian communities, during which they leveled areas of Palestinian land, which they had already razed.

Israel has continuously closed all border crossings to the Gaza Strip for over three years. The illegal Israeli-imposed closure of the Gaza Strip, which has steadily tightened since June 2007, has had a disastrous impact on the humanitarian and economic situation in the Gaza Strip.

The illegal closure has caused not only a humanitarian crisis but a crisis of human rights and human dignity for the population of the Gaza Strip. Measures declared recently to ease the blockade are vague, purely cosmetic and fail to deal with the root causes of the crisis, which can only be addressed by an immediate and complete lifting of the closure, including lifting the travel ban into and out of the Gaza Strip and the ban on exports. PCHR is concerned that the new Israeli policy is simply shifting Gaza to another form of illegal blockade, one that may become internationally accepted and institutionalized. Palestinians in Gaza may no longer suffer from the same shortage of goods, but they will remain economically dependent and unable to care for themselves, and socially, culturally and academically isolated from the rest of the world.

Israel has continued its settlement activities in the West Bank in violation of international humanitarian law, and Israeli settlers have continued to attack Palestinian civilians and property.

On Sunday noon, 23 January 2011, Israeli settlers from ‘Carme’el’ settlement to the east of Yatta village, south of Hebron, attacked Palestinian shepherds in Um al-Khair area and prevented them from grazing animals. According to information available to PCHR, dozens of settlers attacked Suleiman al-Hathalin and his two children while they were grazing animals. The settlers also beat two Italian human rights defenders. Israeli forces later intervened and abducted the two human rights defenders.

On Sunday afternoon, an Israeli settler from ‘Ma’oun’ settlement to the east of Yatta village, south of Hebron, attacked a cattle in Maghayer al-‘Abeed area and killed a sheep and a dog belonging to Hani Salama Makhamra. The settler also threatened to fire at Makhamra’s two children.

Following the Friday Prayer on 21 January 2011, dozens of Palestinian civilians and international and Israeli human rights defenders organized a peaceful demonstration in Bil’in village, west of Ramallah, in protest of the construction of the annexation wall. They carried the Palestinian flag and portraits of Bassem and Jawaher Abu Rahma, who were killed by Israeli forces, and of Jonathan Bullak, an Israeli human rights defender who has been detained by Israeli forces. Israeli soldiers stationed in the area fired rubber-coated metal bullets, sound bombs and tear gas canisters at the demonstrators. As a result, a number of demonstrators suffered from tear gas inhalation.

Also following the Friday Prayer on 21 January 2011, dozens of Palestinian civilians and international and human rights defenders organized a peaceful demonstration in Ne’lin village, west of Ramallah, in protest against the construction of the annexation wall. They clashed with Israeli troops positioned near the Wall. Israeli troops fired rubber-coated metal bullets, sound bombs and tear gas canisters at demonstrators. As a result, a Palestinian civilian, who has not been identified, was hit by a tear gas canister to the right foot. Additionally, a number of demonstrators suffered from tear gas inhalation.

Also following the Friday Prayer on 21 January 2011, dozens of Palestinian civilians and international and Israeli human rights defenders organized a peaceful demonstration in Beit Reema village, northwest of Ramallah, in protest against land confiscations in the Wad al-Raya area between the villages of Nabi Saleh and Deir Nizam. When the demonstrators attempted to reach areas of land seized by Israeli settlers near ‘Halmish’ settlement, Israeli troops fired rubber-coated metal bullets, sound bombs and tear gas canisters at them. As a result, a number of demonstrators suffered from tear gas inhalation. Israeli soldiers also sprinkled a hot gas onto the face of ‘Alaa’ ‘Ali Barghouthi, 13. He sustained burns to the face.

Due to the number and severity of Israeli human rights violations this week, the PCHR made several recommendations to the international community. Among these were a call for the immediate implementation of the Advisory Opinion issued by the International Court of Justice, which considers the construction of the Annexation Wall inside the West Bank illegal.

In addition, the PCHR recommends that international civil society organizations, including human rights organizations, bar associations and NGOs, participate in the process of exposing those accused of grave breaches of international law and urge their governments to bring the perpetrators to justice.