27 dead in Egypt uprising; Mubarak refuses to step down 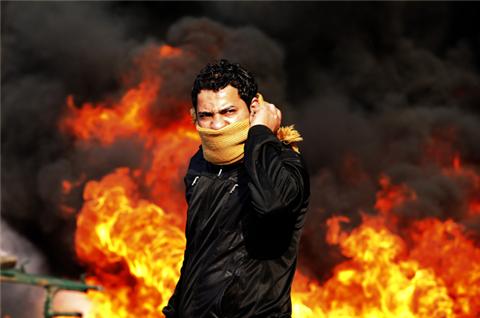 As hundreds of thousands of people took to the streets in Egypt Friday in the 4th straight day of protests, President Hosni Mubarak said that he would replace his cabinet with new officials — a move that was unsatisfactory to the protesters, who called on Mubarak himself to resign.The Egyptian President has a reputation for cracking down on dissent, and Egyptians have, in the past, hesitated from engaging in street protests for fear of being arrested, beaten or shot. But after the uprising in Tunisia two weeks ago that led to the resignation of President Zine al-Abidine Ben Ali, people in Egypt and other places in the Middle East have taken to the streets to protest oppressive governments.

In addition to the 27 people killed, hundreds of people have reportedly been injured in the protests by the Egyptian police. Protesters torched the main government building in central Cairo, filling the streets with smoke. The main opposition leader in Egypt was reportedly hit in the head on Friday morning during the ‘Day of Rage’ protests.

The 82-year old Mubarak, who has ruled Egypt since 1981, appeared on state television late Friday night in an address to the nation in which he defended the crackdown on protests, saying that ‘A thin line exists between between freedom and lawlessness. And I totally side with the freedom of citizens to express their opinions. I (also) hold on very tightly to the security and stability of Egypt, and the rights of citizens to be protected from the danger and those who threaten … public security.’

The protesters called on soldiers from Egypt’s military to join them, shouting, ‘The army and the people, together!’ as soldiers stood aside and flashed peace signs at the protesters. The United Nations Human Rights Commission said that they estimated over 1,000 protesters have been imprisoned by Egyptian authorities.