Egypt cuts off access to the internet from inside the country 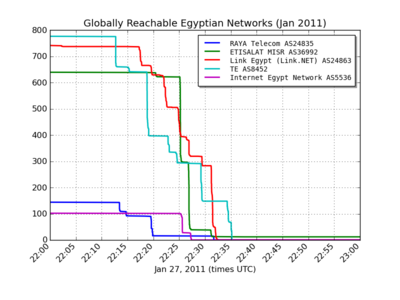 In the latest move to repress the wave of protest that has swept across Egypt in the last four days, the Egyptian government has apparently cut off access to the internet by re-routing traffic from the five major internet providers in the country. This comes after the Egyptian deployment of US-made attack software to stifle online dissent failed to stop online news reports and organizing.Jim Cowie, the Chief Technology Officer of Renesys Technology Company told Digits magazine that he believed the shutdown was done by a re-routing of traffic by each of the main Egyptian internet providers, beginning at midnight on Friday January 28th. He said, “What is most likely is that somebody in the government gives a phone call to a small number of people and says, ‘Turn it off.’ And then one engineer at each service provider logs into the equipment and changes the configuration of how traffic should flow.”

The internet cut-off comes a day after the internet freedom group ‘Free Press’ called on people around the world to challenge the Egyptian government’s use of ‘attack software’ produced by a Boeing-owned subsidiary, Narus, of Sunnyvale, California. The technology, known as ‘Deep Packet Inspection’ (DPI), can be used by the regime to track, target and crush political dissent over the Internet and mobile phones.

When the deployment of the DPI technology failed to stop the online dissent and organizing against the Egyptian government, the government apparently made the call to cut off the internet altogether.

According to the technology website Cnet, ‘An analysis posted by network analyst Andree Toonk, who runs a Web site devoted to monitoring networks, shows that yesterday there were 2,903 Egyptian networks publicly accessible via the Internet. Today, there are only 327 networks’.

Only one Internet Service Provider in Egypt, Noor Networks, appears to still have connectivity to the internet.