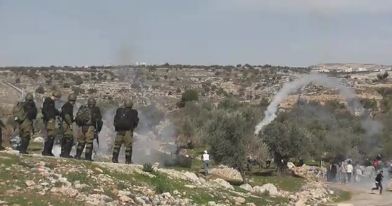 Ramallah – PNN – one injured, many treated for the effects of tear gas inhalation when Israeli soldiers attacked the anti-wall protests in the villages of Bil’in and Nil’in in central West Bank in addition to al Ma’ssara in the south.In the village of Bil’in Israeli and international supporters marched with the villagers after the midday prayers and headed towards the wall built of local farmers lands. A Chilean delegation of MP’s joined the protest this week.

As soon as protesters reached the gate of the wall Israeli soldiers stationed their fired tear gas, rubber-coated steel bullets at them. Mohamed Abu Rahma, 17, from the Bil’in was injured when a tear gas bomb hit him in his hand. Many were treated for the effects of tear gas inhalation.

In the nearby village of Nil’in, villagers conducted the midday prayers at their lands near the wall and were joined by Israeli and international supporters and marched up to the Wall. As soon as people reached the wall Israeli soldiers stationed their fires tear gas and rubber-coated steel bullets at them. No injuries were reported.

At the village of al-Ma’sara, southern West Bank, soldiers attacked the weekly anti-wall protest Villagers along with international and Israeli supporters gathered at the local school after midday prayers on Friday and marched towards lands taken from local farmers to build the wall.

Israeli troops stopped the villagers and their supporters from leaving the village, using rifle butts and batons to force them back.