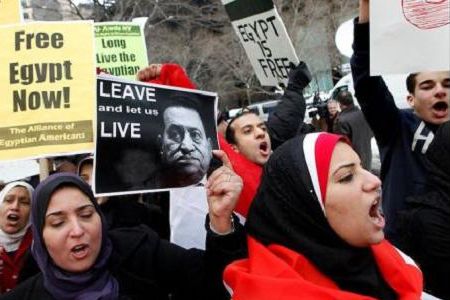 Massive crowds of Egyptians and supporters held a protest on Saturday outside the UN Headquarters in New York to express support to the ongoing protests against the regime of Hosni Mubarak in Egypt.The protesters chanted slogans denouncing Mubarak and his policies, and held banners in support of the ongoing uprising.

In Cairo, protesters continued to march and challenged the night curfew by marching downtown Cairo on Saturday at night while some protesters set the building of Egypt’s National Democratic Party on fire for the second time.

The Egyptian army resumed the deployment of armored carriers in the streets of Cairo in an attempt to stop the protests.

After the government shut down all networks and cellphone coverage on Friday, some mobile phone coverage was resumed in the capital Saturday while internet service remained disconnected.

On Saturday, twelve protesters were killed in clashes with the Egyptian security forces in Beni Suef, 115 kilometers (nearly 72 miles) south of Cairo.

The number of protesters killed by the Egyptian Police and Security Forces exceeded 1000 while at least 2000 were wounded in clashes that took place in Cairo, Alexandria and Suez.