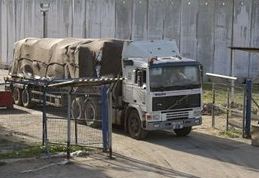 The Israeli Authorities decided, on Tuesday, to partially open the Karni and Kerem Shalom crossings to allow the entry of food supplies and construction materials on their way to the UNRWA, the Ma’an News Agency reported.Engineer Raed Fattouh, Palestinian liaison official in Gaza, reported that 140-150 trucks loaded with supplies, including 7 trucks loaded with iron and construction materials entered the Gaza Strip.

Fattouh added that Israel allowed the export of eight trucks filled with berries and flowers from Gaza to Europe.

On Monday, Israel opened the Kerem Shalom Crossing from 8 a.m. to 4 p.m. to allow the entry of 124 trucks, including 98 trucks for the trade sector, 15 for the agricultural sector, 6 for the transportation sector including 20 new cars.

Three trucks loaded with berries and flowers and were also allowed on Monday while Israel also allowed the pumping of 11390 kilos of cooking gas.

Israel also opened The Erez Terminal and allowed the entry of 125 trucks, including 53 trucks loaded with wheat.