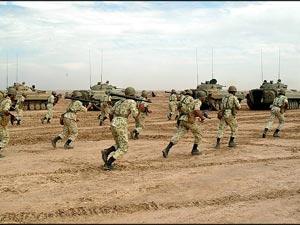 The Egyptian Army deployed two brigades in the Sinai Peninsula in order to fortify the security presence in the area. The move was made after obtaining an Israeli approval. This is the second time Egypt deploys more troops in Egypt since signing the Camp David peace deal with Israel. The deal, signed in 1979, restricts the number of Egyptian forces the Sinai, the locations of deployment and the type of deployed military gear.

The Qatar-based al-Jazeera reported that Israeli officials confirmed, Monday, that Israel allowed the deployment of 800 Egyptian soldiers in Sinai, especially in Sharm al-Sheikh, far from the border with Israel.

Israeli media sources reported that Israeli military officials confirmed that Egypt had officially asked Tel Aviv to allow the deployment of the more Egyptian forces to control the security situation along the border amidst the ongoing protests against the regime of President Hosni Mubarak.

The Israeli government did not comment on the issue while the Egyptian government refrained from issuing any statements in this regard.

This is the second time Egypt deploys forces sine it signed the peace agreement with Israel as the deal identifies this area as a disarmed zone.

Following Israel’s withdrawal from Gaza in 2005, the Israeli government allowed Egypt to control a restricted number of its forces along the border with Gaza in order to monitor the borders and prevent the smuggling of arms to the Gaza Strip.
Israeli officials, including Prime Minister, Benjamin Netanyahu, repeatedly expressed concern that the ongoing protests in Egypt would lead to a real change the would result in installing a new system that is “hostile to Israel”.

During a press conference with the German Chancellor, Angela Merkel, in Jerusalem on Monday, Netanyahu said that Israel fears that the current situation in Egypt would lead to a new “fundamentalist Islamist regime, similar to the regime that rules Iran”.