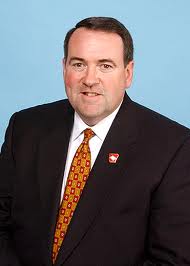 Mike Huckabee, Republican Party US presidential frontrunner, visited the Israeli Knesset on Monday as part of a tour of Israel and the occupied West Bank.Huckabee took part in a special session of the Knesset Committee for Immigration, Absorption and Diaspora Affairs, centering on the challenges of anti-Semitism that face Israel and the Diaspora

Addressing a group of MKs he said that, ‘Good Israeli-U.S. relations are not just an option, they are rather a necessity for both sides, and an obligation upon all of us in the American government.”

With reference to the now-defunct freeze on settlement construction on occupied Palestinian land, Huckabee told his audience, ‘I don’t see why bedrooms for their children built by Jews on a hilltop in Samaria pose a threat to world peace. It’s the lack of construction that is irrational, not the opposite… Those who aim their rifles at Jewish babies are irrational; the danger is not the weapons, but the hatred behind the weapons. Why should Israel give any territory to people who don’t recognize its right to exist?.’

He went on to say he would continue to work to preserve the Nation of Israel’s historic right to live in the Land of Israel.

MK Yulia Shamalov-Berkovitz (Israel Our Home) praised Huckabee for having spoken ‘very Zionistically,’ adding that there are some Israelis who could learn from him.