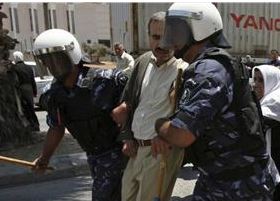 Palestinian Security Forces in the West Bank arrested, in January, 289 Hamas members and supporters in the West Bank, and ordered more than 750 residents to head to nearby centers for interrogation.The Islamic Resistance Movement, Hamas, issued a press release stating that
Hamas said that the arrests and interrogation orders were made against men, women, elderly and even some children from different districts in the West Bank.

It added that some of the residents were rearrested shortly after they were released, even before they made it back home.

The movement also claimed that the security forces want to interrogate wives of Hamas members and supporters imprisoned by Israel.

Furthermore, Hamas said that five university teachers and 32 students were arrested in several parts of the West Bank.

Hamas said that more than 16 of the detained members and leaders of Hamas were moved to hospitals and clinics, due to extreme torture that reportedly took place during interrogation.

Hamas further stated that ten of its detained members were sentenced by local courts to imprisonment for periods that varied between three months and five and a half years.