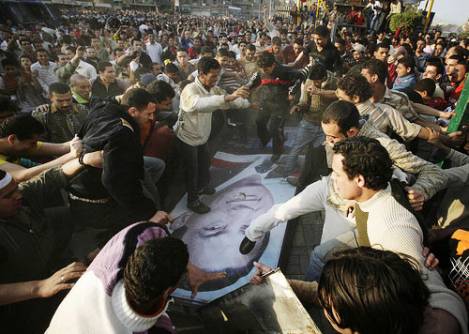 Amnesty International today called on the Egyptian authorities to protect the right to peaceful protest as clashes erupted with organized groups of pro-government supporters attacking protesters in Cairo and across Egypt.An Amnesty International fact-finding team in Egypt reported that the violence appeared to be orchestrated in part by the authorities to suppress continuing protests calling for political reform.

‘The fact that such violence is allowed to continue as the army stand there begs the question whether they have orders not to interfere.’

Earlier in the day, the army said anti-government protesters should return to their every day lives, following the announcement on Tuesday by President Mubarak that he would not stand for re-election.

Later the army is reported to have allowed pro-Mubarak supporters to flood into Tahrir Square and attack the anti-government protesters.

An Amnesty International staff member trying to get to Tahrir Square was blocked by groups of pro-Mubarak demonstrators. He witnessed people leaving the square with injuries, apparently as a result of the clashes.

The attacks on anti-government demonstrators are now occurring in other key cities across Egypt. In Mahalla, an industrial area north of Cairo, eyewitnesses told Amnesty International researchers on the ground that they saw lorry loads of pro-Mubarak supporters leaving this morning.

‘It looks like much of this violence is being orchestrated by the Egyptian authorities in order to force an end to the anti-government protests, restore their control and cling on to power in face of unprecedented public demands for them to go,’ said Hassiba Hadj Sahraoui.

The violence between protesters fits into a familiar pattern of political violence in Egypt, orchestrated by the authorities in order to disrupt and disperse protests.
In previous election years, Amnesty International documented how hired thugs were used by the Egyptian authorities in order to intimidate voters and to disperse gatherings of their political opponents.

Over the last nine days, Egyptians have been demonstrating in unprecedented numbers for political and human rights reform.

On Tuesday, hundreds of thousands of people gathered for what organizers dubbed a ‘Million Man’ protest calling for President Mubarak to step down and corruption, poverty and police abuses to end.