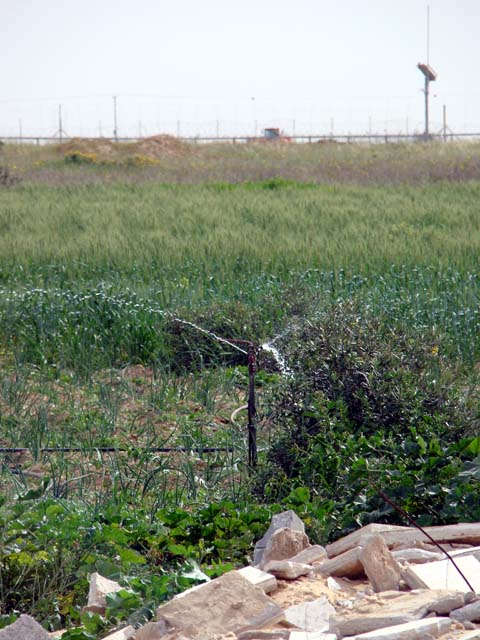 After documenting the destruction of 27 water cisterns, and diversion of 15 mountain springs by Israeli forces over the last year, the Humanitarian Coordinator for the Occupied Territories for the United Nations, issued a statement condemning the attacks on water.Israeli occupation forces and settlements control 75% of the water in the West Bank, and many Israeli officials, including former Prime Minister Ariel Sharon, have stated on multiple occasions that part of the reason for expanding settlements on hilltops in the West Bank is to control the dwindling water supply there, and divert it to the people of Israel.

In addition, according to Israeli law, Palestinians are allowed to dig wells just ten meters deep, while Israelis can dig wells up to 80 meters deep. The differential water allowances, and the control of the water sources by Israel, has resulted in widespread water shortages among Palestinians in the West Bank, particularly in summer months, when Israeli authorities cut off the water supply for weeks on end. Even though the average Palestinian uses just one-tenth the amount of water of the average Israeli, due to the cut-off of water, Palestinians often find themselves with insufficient amounts to farm or even to drink and bathe.

Maxwell Gayland, the UN Official responsible for monitoring the humanitarian condition in the West Bank and Gaza Strip, said this week, ‘It is difficult to understand the reasoning behind the destruction of basic rain water collection systems, some of them very old, which serve marginalized rural and herder Palestinian communities where water is already scarce and where drought is an ever-present threat.’

The destruction of the rainwater cisterns, and diversions of the springs, violates a 2001 agreement between the Israeli government and the Palestinian Authority governing the control of water in the Occupied Territories, which states, “The Israeli and Palestinian sides view the water and waste water sphere as a most important matter and strongly oppose any damage to water and wastewater infrastructure.”

Palestinians living in ‘Area C’ of the West Bank, under full Israeli control, are required to obtain a permit to construct a rainwater collection cistern, or any structure at all, and Israeli authorities stopped issuing these permits completely in 2000. Claiming that the cisterns are constructed ‘without a permit’, the Israeli forces move in on a regular basis to dismantle and destroy them.

The head of the Palestinian Water Authority countered the claim that water cisterns require permits, stating, “In addition to preventing the rehabilitation of Palestinian water cisterns, particularly in Area C, the Government of Israel has recently intensified its campaign of destroying these same cisterns. The rehabilitation of water cisterns does not require prior approval from the Joint Water Committee (JWC), nor does it require a construction permit from the Israeli Civil Administration.’

There are also a number of cases documented of Israeli soldiers invading a certain area firing directly at water tanks and cisterns to cause them to leak.