Bil’in protest in solidarity with Egypt attacked by Israeli troops 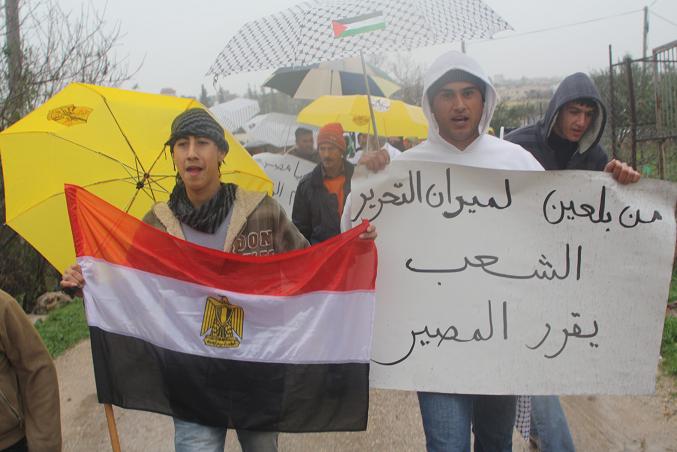 Several hundred Palestinians, along with international and Israeli supporters, gathered in the village of Bil’in on Friday for their weekly non-violent protest. This week’s protest called for national unity, and in solidarity with the Tunisian and Egyptian uprisings. Israeli troops attacked the march with tear gas and concussion grenades.After mid-day prayers Friday, the villagers gathered at the center of Bil’in, and began marching toward the site of construction of the Israeli Annexation Wall on village land. The protesters carried banners and chanted slogans in solidarity with the people of Egypt. They waved both Palestinian and Egyptian flags, and called for national unity among all Palestinians. In addition, they chanted for an end to the Israeli military occupation of their land, and called on Israeli authorities to carry out the order of the Israeli High Court to change the route of the Wall from the current site.

When the march drew near to the site of the Israeli Wall – which is constructed on land belonging to the people of Bil’in – the Israeli troops stationed there began firing several dozen rounds of tear gas and concussion grenades toward the demonstrators. A number of the demonstrators suffered from asphyxiation, and had to be treated by ambulance crews nearby.

A statement issued by protest organizers included the following points: ‘1- We salute the Egyptian and Tunisian people and reiterate the nation’s right to live in freedom and pride. 2- We call for national unity and the preservation of civil peace, and to protect the home front and tolerance among all segments of society, and to deal with conspiracies and foreign projects in order to pass this historic stage successfully. 3- We hope that the rebelling Arab people make it their priority to demand from any government or leadership to come to sever their ties with the Israeli occupation and abandon the Egyptian – Israeli peace treaty.

‘We believe it would be better to direct the masses towards the Israeli embassies and interests as an alternative to targeting the capabilities of the Egyptian people and the headquarters of its security. 4- We call on all free nations in the world, especially Europe and the U.S., to get out in massive demonstrations on the 11th of February 2011 to confirm the right of peoples to live in freedom and dignity — a day of anger against the Israeli occupation of Arab land, and as a beginning of the Global Intifada. The Peoples Committee also condemns the arrest of many children in the past few days and demands their immediate release.’